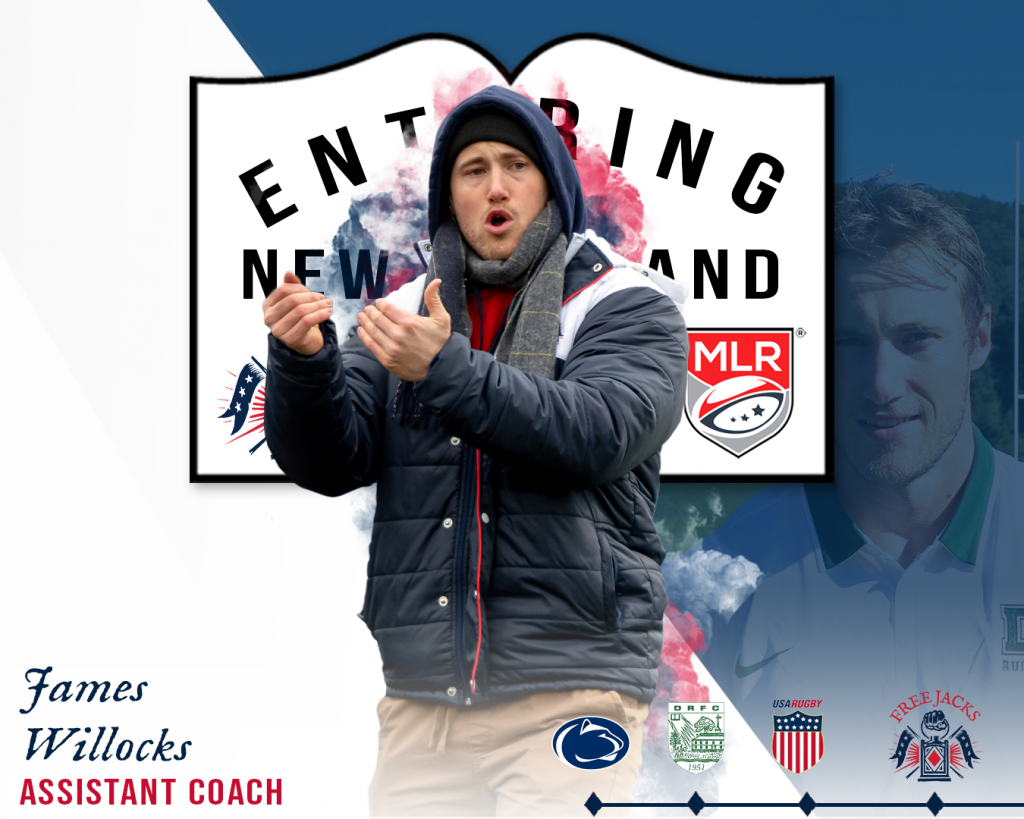 BOSTON – December 2, 2020 – The Free Jacks today announced the appointment of James Willocks as an assistant coach for the 2021 season of Major League Rugby. Having served as a technical advisor for the side in 2019 and 2020, Willocks will take on the new position alongside head coach Ryan Martin. As former USA Rugby Collegiate All-American head coach, and current head coach of Dartmouth College, Willocks is a promising coaching talent with the breadth and depth of knowledge to shape the Free Jacks this season.

“I am thankful to have worked with the side as an advisor through the 2019 and 2020 seasons and have picked up valuable learnings within the domestic professional game along the way,” commented Willocks. “I’d like to thank Josh and Kareem for their commitment and efforts throughout this time. I’m very excited to continue to learn and grow with Ryan Martin’s guidance, and add value where I can.”

Willocks is well versed in the collegiate high performance and rugby landscapes having been immersed since 2012 when he was appointed an assistant coach at Ivy League rugby power Dartmouth College in New Hampshire. Willocks also served as a strength and conditioning coach for the D1AA Dartmouth football program during the 2013 to 2016 seasons, winning the Ivy League in 2015. In 2017, Willocks took a sabbatical from New England, appointed head coach of traditional powerhouse program Penn State University where he guided the Lions to the Varsity Cup Semi-Finals. Willocks returned to Dartmouth as head coach and has led the team to six Ivy League 15s Championships, five Ivy League 7s Championships, a D1AA National Championship, and the Las Vegas 7s Championship in 2019.

“Having had the opportunity to observe the progress of the Free Jacks since 2019 and James’ progress since 2012, he is well poised to take the next step in becoming a more hands-on coach of the pro side,” commented Free Jacks CEO, Alex Magleby. “A steely-minded professional, with high standards and a knack for leading by example, James is eager to continue to develop in the coaching world. With his past experience with the Free Jacks and his growing strengths as a top coach James will compliment Ryan well and be a key asset for our players.”

As former assistant coach of USA Rugby Men’s Collegiate All-Americans from 2016 to 2018, and head coach from 2018 and 2019, Willocks brings a critical understanding of the performance pathway through youth, collegiate, and professional levels. A leading professional coach in player and person development, Willocks has been heavily involved with the Free Jacks Academy system and will continue to shape the development of the game on and off the field.

Originally from Balcultha, New Zealand, Willocks attended John McGlashan College in Dunedin for high school where he played for the First XV before attending the University of Otago where he graduated with a degree in Physical Education and played premier level rugby with Alhambra Union Rugby Club. After university, Willocks worked with Otago rugby in the (then) ITM Cup as a strength and conditioning coach before heading to the states where he now lives in New Hampshire with wife, Whittaker, and children, Charlie and Bo.