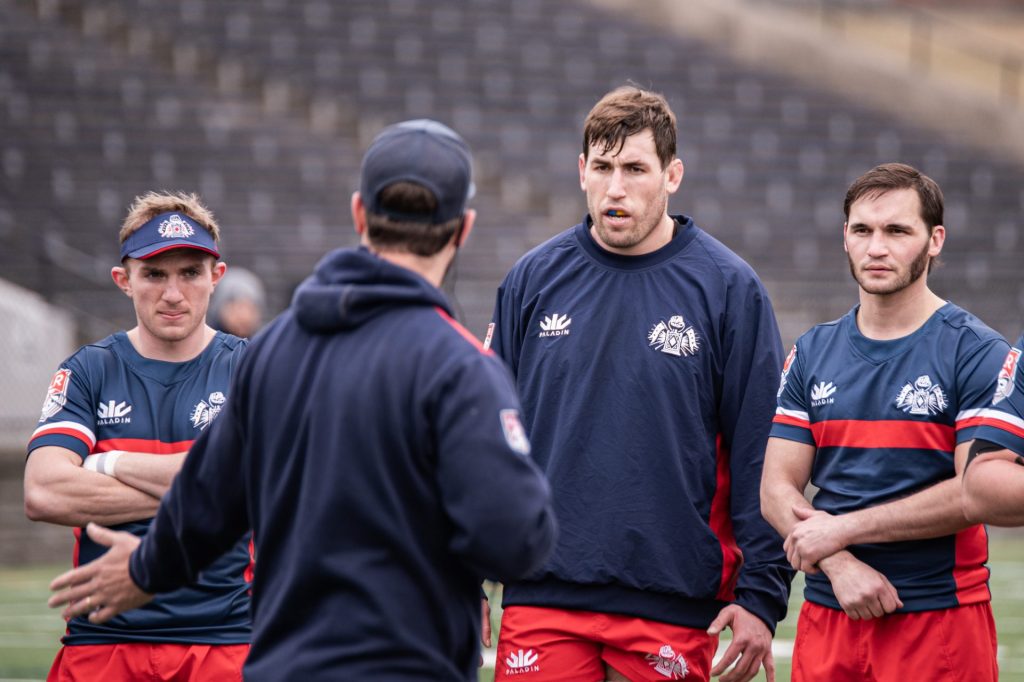 I think across the board, we know we have more work to do. We are still learning and taking new things coming onboard. We are hungry and we want to stay like that all year, especially heading into this weekends match.

This weekend, the New England Free Jacks will be making a trip to Holden Yungert’s home state.

Heading to Los Angeles to take on the Giltinis at the LA Memorial Coliseum, Yungert will have his parents, at least one of his brothers and friends at the game, their voices offering some support a long way from home.

So far this season, Yungert has been involved in both of the Free Jacks’ games this season, coming off the bench against his former team, the NOLA Gold, in the season opener and starting last weekend’s clash at Old Glory DC.

Signed by New England in early November, Yungert brings a wealth of experience to Quincy, Massachusetts, as well as sideburns that feel more than at home in the City of Presidents.

“I remember when the schedule first came out and that was the highlight of it; week one, round one, NOLA,” Yungert, when asked about facing former team NOLA Gold in round one, said.

“Who doesn’t love to go back, visit and play against some old teammates? That was huge. It was great to get that. We checked all the boxes, or nearly all of them, that we were looking to do that weekend.

“We considered it as a cap to our preseason, trying to stick to our game plan, and do what we were looking to do in the three weeks we had to train prior.”

Having been with New Orleans since the 2018 Major League Rugby season, Yungert established himself as a crowd favourite at the Gold Mine. Whether that be because of his trademark sideburns or the mere way in which the 28-year-old played the game.

A tenacious competitor, the half-back played his college rugby for the Saint Mary’s Gaels, representing the school in D1A College Rugby, winning three national Championships over his five years there and in 2017 was names the MVP of the tournament.

After time spent playing club rugby in Australia, the half-back was selected to play for the USA Selects in the Americas Pacific Challenge, playing in games against ‘A’ sides from Samoa, Uruguay and Canada.

Playing in 43 games whilst attached to the NOLA Gold, Yungert brings a wealth of experience to Veterans Memorial Stadium and creating greater depth in the scrum-half position, a position that already had the likes of John Poland, Sean Yacoubian and Oliver Engelhart in its ranks.

Whether that comes from rugby playing ability or experiences on the field, Yungert will prove to be invaluable to the team in the long run. This can no more be seen than in his experience at the Coliseum last season.

On 4 July last season, he and his Gold teammates went to California to take on the Giltinis, surprising their hosts with a 20-21 win on the road, the only side to beat the eventual champions on home soil in the 2021 season.

“Last year, we had a pretty special moment there,” Yungert said, “it was the fourth of July in the Coliseum, with that upset win over the Giltinis.

“I just remember, well aside from the fireworks show after the game that seemed to go on forever, was that first step out there. Going right onto the field, where you come out of the tunnel, the vastness of the stadium is just incredible.

“Walking out of the tunnel, you are awestruck at the columns, the red seats flaring up. It is an incredible spot. Legendary really.”

Part of Yungert’s move to Massachusetts was motivated by his partner, Maddie, moving to the area in order to do a master’s in nursing. Contacting Tom Kindley [Performance Director] and Alex Magelby [CEO] to see if there was an opportunity to play for the Free Jacks, within several weeks he had signed a four-year contract in New England.

Moving to the area in the early Fall, Yungert was keen to get back playing rugby as soon as possible, playing club rugby in the region.

“I was leaving NOLA about that time [September], and I moved here with my girlfriend,” Yungert said. “She was starting school, so I just jumped on in, reached out to Tom [Kindley], asked him about club rugby and he put me in touch with Mystic River Rugby Club.

“So, I got in with them and I knew a couple of guys previously. Peceli Rinakama played at NOLA in year one, so I knew a few faces out there, made a bunch of friends and got a locals view of the city pretty quickly.

“That was my first time in a couple of years playing club rugby. Being able to get out there, run around and get back to the roots of it. I had a blast doing that. It was low pressure, a lot of fun, because I was just out there to get a run in and play rugby.”

Turning out for Mystic, the 28-year-old first got exposure to a number of players that would become teammates at the Free Jacks. Kyle Ciquera, Cam Davidowicz, Cael Hodgson, Harry Barlow, Justin Johnson and even more representing the side in 2021.

Not content with just playing in his regular position, when called upon Yungert even started games at fly-half, as well as on the wing over the course of the American Rugby Premiership campaign.

This winter has also been the first time that Yungert has experienced what he calls a ‘proper winter’. From Petaluma, California, his experiences of the snow confined to his home state, whilst the climate in Louisiana rarely, if ever, experiences snowfall.

“I have been to the mountains a few times in California, seen the snow there and done that whole thing,” he said. “It comes in, dumps it for a few days, and you never think it is going to stop, then you just shovel off your car and go about your day.

“We are lucky enough that we are training in a bubble most of the time, so the conditions are nearly perfect, but as soon as you step out of that, it is like a blizzard most days.”