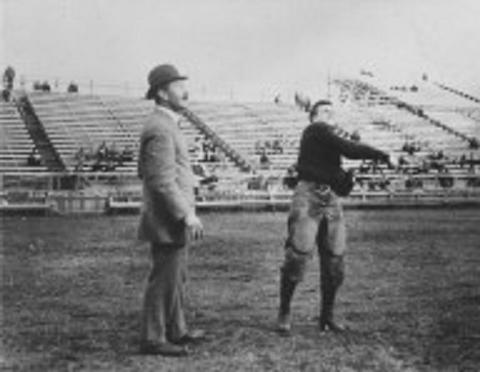 In January 1906, sixty-two colleges convened in New York City to approve football rules changes, including, allowing a forward pass, adding a fourth down to make five yards, and eliminating the flying wedge and other forms of excessive roughness. The committee had every reason to believe that these modifications would curb the sport’s violence to reduce player injury, and, possible death.

Spurred into action by President Theodore’s Roosevelt’s 1905 call for reform, America waited for September 1906 with optimism that autumn would produce a calmer football season.  Unacceptable would have been a return to the high national fatality totals of 1904 (19) and 1905 (18) with additionally, their steep totals of bodily injuries.

The newly created committee formalized its mission and membership in March 1906 as the Intercollegiate Athletic Association of the United States, the precursor to the NCAA, so named in 1910.  Eleven-years later, the organization hosted its first event, the National Collegiate Track and Field Championships in 1921.

Welcome To The Forward Pass

On September 5, 1906, the University of St. Louis opened its gridiron season with a 20-0 win against Carroll University (Wisconsin). The St. Louis team practiced the forward pass secretly during the summer. The squad would go 11-0, with a scoring tally of 407-31, winning more games than any college eleven in that 1906 season.

The oval watermelon pigskin of that era was squat in the middle, and difficult to grasp.  St. Louis coach Eddie Cochems acted the visionary, imagining how a sleeker version of a football could affect the game.  He wrote, “The ball is too large and too light. With a ball change as I have proposed, longer, narrower, and a bit heavier, it would carry in the face of a strong wind, I firmly believe that the game of rugby would develop into one of the most beautiful and versatile sports the world ever saw.”

Despite St. Louis’s triumphs and the media exposure that accompanied the coverage of the new “aerial attack,” few other colleges employed the forward pass as an offensive weapon. Part of the negative reactions were the restrictions and penalties governing the new play. These numbered:

Of important note is that during the many 1906 discussions about football reform, scant mention was made about adding player protective apparatus. For more than eighty-years, rugby had been played successfully without uniform protection. When the gridiron rules changed in the early 1880s, the line of scrimmage and the five-yard first down rule witnessed head-on-head and bone-on-bone contact causing more injuries as a result. In effect, no sport had ever employed protection and only gladiators in ancient Rome used armor and helmets for defense.

It would be years into the 20th Century before football adopted helmets (leather at first), shoulder pads, hip pads, face guards, and thick pants with interior lining. Nose guards of different designs and sizes represented the sole facial protection for those early players.

The football seasons of 1906 and 1907 generated a gratifying reduction of fatalities to 11  for both years, accompanied by concurrent declines in serious bodily harm. Much credit was given to the new rules changes that sparked the falling-off of the negative data.

Gridiron football would continue as the official collegiate contact sport. But in 1914, after many years of high numbers for death and injuries, a second wave of reform would occur. These adaptations also were spurred on by an American president, Woodrow Wilson.

In 1906, there remained one prominent story yet to tell: The leading universities on the west coast – U. California and Stanford  – abandoned gridiron to play rugby.