Jack Reeves: I Don’t Think We Are Ever Satisfied As A Team 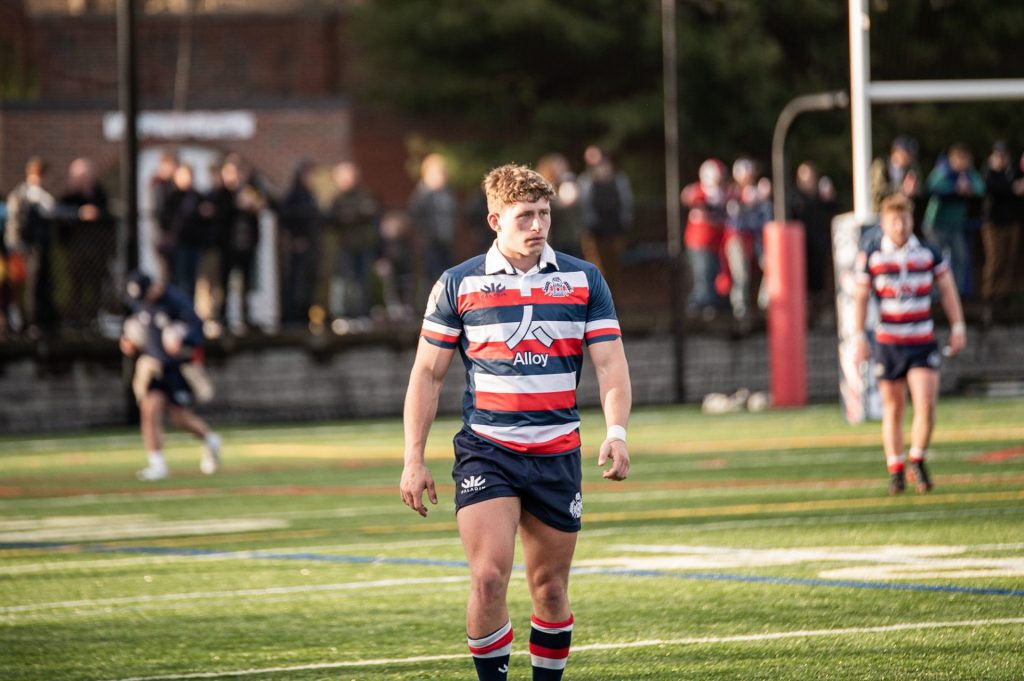 When it was announced that Jack Reeves would be joining the New England Free Jacks on a two-year loan basis from English Premiership side, Gloucester, it was clear that a player of immense quality was making his way to Quincy, Massachusetts.

An England U20 international, the center has risen through the ranks of the clubs Academy, making five appearances for the first team prior to heading across the North Atlantic. At 22, the back is young, raw and has plenty to prove during his time playing in New England.

“Apart from when I was 18, I hadn’t really put together a whole season of rugby,” Reeves said. “I had been training and stuff like that, but there was only so much gym and running you can do.

“I was learning off these internationals like Billy Twelvetrees [England], Mark Atkinson [England] and Chris Harris [Scotland], and I just wanted to prove myself and put it into play. When I was speaking with Mark, he said that I had a couple of options; I could either go to the Champ [English second division] or go to MLR.

“I just thought the rugby [in MLR] suited my playing style a lot more, it is a bit more expansive, and then it gave me a chance to go to America and meet a lot of new people, so I thought that the New England Free Jacks sounded more my cup of tea.”

Having begun his rugby journey at Dursley RFC in Gloucestershire at the age of five, Reeves is very much the local lad in Gloucester, the center qualifying for Canada thanks to his late father, Ross.

Making his senior debut in the 2018/19 season when dual-registered with Championship side, Hartpury University, Reeves would make a trio of appearances for Gloucester, but in the years that followed was unable to become a regular at Kingsholm.

Part of the reason for this was Covid-19, the global pandemic significantly reducing the opportunities for the center to play men’s rugby. So far in the 2022 Major League Rugby season, Reeves has made eight appearances for the Free Jacks, his most recent from the bench in the 26-20 victory over Old Glory DC.

It was a win that extended New England’s unbeaten run to nine games and secure the teams’ place in the playoffs, Scott Mathie’s men being the first side to do so in MLR. Having been on the hunt for regular rugby, Reeves is very much enthralled with life in Free Jacks colors thus far.

“I’m really enjoying it,” Reeves said. “I think it is the rugby and the environment, the combination of both is real good for me.

“Obviously, I love Gloucester, and I love learning from the internationals and everything back there, but then you are just training week in and week out, maybe getting three or five games a year, but I don’t think that development as much.

“I have come over here, and bar a little ankle injury, I have been involved with the squad most weeks. On that basis, it has really helped my rugby improve, learning my body, learning how to manage yourself when you are playing every week, and we are doing pretty well as well.

“The enjoyment factor with the boys I live with, and the whole squad, we all get along like a house on fire, so I think that is one of the main reasons we have been so successful over here, because we all understand each other, we all have the same purpose, it just gets the whole environment pumping really.”

If it weren’t for that ankle injury, Reeves may have been able to make further appearances for the Free Jacks, even if that knock has helped him to learn some of the lessons he needed to in order to progress in adult rugby.

“The first five games, when I was all sweet, I was getting better and better, making smarter decisions and then obviously the ankle caused me to be a bit in and out,” Reeves said.

“That was a frustrating time, but at the same time I think it taught me a few things; not to rush back, not to be silly and make smart decisions.

“Scott talked to me about that, that they didn’t want me playing at 80%, they wanted me back at 100% and about being careful and taking the time off. They were really understanding about that, so when I have come back and my ankle is feeling good, there is better understanding of my body, and I think my decision making is improving.

“That is credit to Scott and the staff, they talk to you, and they advise you, then you have got players like Dougie [Fife], Jesse [Parete] and Waaks [Beaudein Waaka] that have been around the block, and they are the ones that tell you to be smart around things.”

Enjoying his time in Massachusetts, Reeves has been able to have numerous members of his friends and family come to Boston to visit and take in American culture alongside one another, with ice hockey becoming a firm favorite of his.

“I went to my first Red Sox game on Sunday,” Reeves said. “My mum and uncle flew over from England for the weekend, so I took them to a Red Sox game, so that was really good fun.

“I have also been to the NHL to watch the Bruins. That is a good sport. It is fast, a lot of things go on, it is physical. I probably enjoyed the Bruins the most, that was real good fun to watch.”

It is time with loved ones that has meant rather a lot to Reeves, who has had a turbulent time away from the field in the leadup to his move to Quincy, as well as stemming any homesickness he might be feeling as the season wears on.

“It has been a pretty tough last couple of years with Covid, and my dad passed away, it has been a lonely time,” Reeves said. “I was leaving everyone from back home, I was leaving my mum, which was real tough on her.

“For my mates and family to get over, it really meant a lot. I tried to spend as much time as I could with them, I hope they really enjoyed it and I am now really grateful for it, because I miss them all a lot.”

Although the Free Jacks have clinched a playoff spot, it is finishing strongly that now occupies the thoughts of Reeves and his teammates.

With four games until the conclusion of the regular season, that race to finish on top begins with a game against Rugby ATL this Friday.

“I don’t think we are ever satisfied as a team,” Reeves said. “Obviously we are buzzing with our record, with our performance, but we know that the ceiling is so much higher.

“We have got a 40-man squad, it has been a squad effort, it has not just been the 15 starters on the weekend, everyone has been grinding week in and week out, then you realize we have got nine wins on the bounce, and it has come out of nowhere because everyone is just grinding away.

“It is a great feeling, knowing we are going into the playoffs, hopefully in that number one spot so we get a number one seed semi-final, because that Quincy fortress is a tough place to go.”

After ATL this weekend, New England will play their final away game of the 2022 season against the Toronto Arrows, prior to finishing the regular season with games against the NOLA Gold and Rugby New York.

Beaten finalists in 2021, ATL are also in the pursuit of a place in the playoffs, Stephen Brett’s side currently the third-place team in the East Conference.

“I feel like this is one of the biggest games we have played so far,” Reeves said. “They are going to be coming back for revenge after the last game we played, I think this is going to be a massive challenge.

“We know that we prep for every game the same, there is no easy game in this league, and we are really looking forward to it. We have got a lot of stuff that we need to work on the DC fame, and we are getting it all in. I am really proud of the boys, and I think we are going to make it 10 wins in a row.”