Kyle Ciquera: One Of One 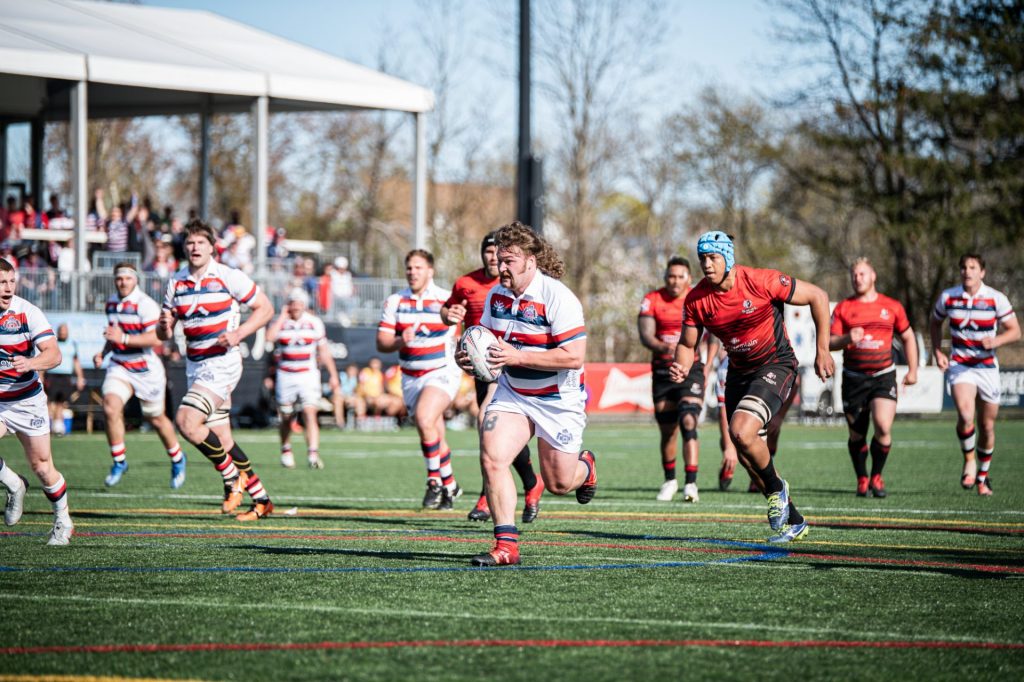 Kyle Ciquera is unique in every sense of the word. That is quite possibly another reason the #1 jersey suits him so well on the rugby field.

Since 2019 the 24-year-old has been a staple of the New England Free Jacks, flying down from St Bonaventure University on a weekly basis in order to compete in the Cara Cup, and now, three years later he is thriving under Scott Mathie.

His rise to the starting XV has been a gradual one, having made three Major League Rugby appearances in the Covid-19 curtailed 2020 season, then nine more in 2021. The difference between then and now is that Ciquera is a starter, having been the go-to man since the team’s eighth game of the regular season against the Austin Gilgronis.

Having grown with his each and every involvement, Ciquera has grown. Whether it be his performances, his technical ability at the scrum or carrying the ball effectively, it is the culmination of three years hard work.

“Last year I was on the bench for nine games, I wasn’t getting any game time either, I was probably playing at the backend for five or 10 minutes of the game,” he told freejacks.com.

“I made a huge jump and with Mike and Scott coming in, that was such a focal point. They told everyone at the beginning of the year that they were going to give everybody a shot, to see how they go, and I guess I have just made the most of what they gave me.

“All the sacrifice and commitment I have put into it has kind of paid off. Don’t get me wrong, it was a strain at some points, asking if this was actually for me and why I was doing this. But it has all come to fruition now.

“I am just happy that my parents – my parents are pretty influential in my life, and I am happy they have helped me do it. They have never discouraged me or told me to quit or anything like that.

“They always told me to keep trying and it was always going to pay off. My other big thing was that if I were to quit, in five or six years, would I regret not seeing it through?”

Born in Putnam, Connecticut, Ciquera’s rugby journey began as a freshman at Bishop Hendricken High School. An all-male school in Warwick, Rhode Island, the prop was largely there in the pursuit of furthering his career on the ice rink.

Describing himself an “enforcer” during his hockey playing days, it is that time spent in Rhode Island that has shaped the man you see gracing a rugby field today. For example, whilst at school, his appearance was closely monitored, short hair a necessity, as was being clean shaven.

It is also where he first picked up a rugby ball. Keeping fit during hockey’s offseason was on Ciquera’s mind, and Bishop Hendricken was one of few schools in the area to have a rugby team. Instantly, Ciquera fell in love with the game, the sport completely different to his experiences in both hockey and football.

“To start off, the reason I was really attracted to rugby was because I was never able to run the ball in football,” he said. “I was always put on the line because of my size, but the big thing was that I was able to run with the ball.

“That is kind of what stuck with me, why I fell in love with it, honestly. In high school, we had a tightknit group of guys and we got to travel. We were able to go to England and Wales in my third year of high school, and that was when I really decided that I wanted to play rugby and see where it went from that experience alone.”

After graduating high school, Ciquera enrolled at St Bonaventure University, where he would major in finance before pursuing professional rugby. It was there that the 24-year-old really made his name known, becoming a three-time First Team D1A Rugby East All-Conference player, and a three-time Collegiate All-American.

It was also during this time that Ciquera began growing his hair long. After five years of being told how to appear, it was finally time for the prop to do exactly what he wanted to, the mullet coming out of a necessity rather than style initially.

“I didn’t like how it got in my face when I was playing, so I thought why not rock the mullet?” he said. “I like being the different person in the room, I like being that weird person that stands out. I don’t like being the same.”

When asked about his sporting heroes whilst growing up, Ciquera goes on to cite the Chicago Blackhawks’ Patrick Kane as another inspiration for the mullet, the right wing having sported a similar haircut in the early 2010s, the only difference being Kane’s “racing stripes”.

Mark Messier is another hero of Ciquera’s, the Canadian become a firm favorite of the 24-year-old’s largely thanks to being able to watch his highlights on YouTube.

There is something infectious when speaking to Ciquera. Going into the conversation, preparation is pretty simple. He is all over Free Jacks social media, but his story goes far deeper than that.

You learn that in 2019, he played in Cara Cup games in his final semester of college, the final game of that campaign [against Lansdowne] coming just after his graduation, the forward boarding a plane to New Zealand just over a week later to carry on his rugby development for a further three months.

In preparation for the 2021 season, Ciquera was even working on a boat, oyster farming. Living back home in Rhode Island, every day had its adventures. A typical day would see the loosehead drive an hour to work, carry out his responsibilities there, before an hour drive to the gym before heading back home. For four months.

His motivation was simply to get better at the game he loved, to progress as a professional athlete, something that has been a dream for as long as he can remember. Now, with that goal being lived out in some sense, he is determined not to be a flash in the pan.

“I think the big thing for me is never getting complacent with where I am at,” Ciquera said. “I think that is huge for any person in any sport. You have to keep getting better, keep striving to be a person on and off the field and just keep the motivation to want to be better.

“I think if you have those things, you will keep becoming a better player no matter what.”

Eventually we do get around to that personality. He laughs at the comparison to Charlie Day’s ‘Patriot’ character in It’s Always Sunny in Philadelphia, Ciquera similarly known to rock a denim jacket with the American flag on it, his nickname more than appropriately being ‘The Eagle’.

That moniker came as a result of being the only American player to check into the hotel where Free Jacks players were staying during the Cara Cup, the rest of the domestic players all living in the local area.

“Who you see on social media is pretty much who I am as a person,” Ciquera said. “I might go over the top a little bit, some of the time [he laughs], but at the end of the day, it is who I am.

“I am a pretty laidback type of person, willing to put myself out there. I didn’t really know a lot of the guys coming into the Cara Cup, they were all older than I am, but once I had been hanging around with them for a month or so, my personality started to come out a bit.

“Especially during the 2020 season, my personality just came out more because I knew a lot more of the guys. But they were all so friendly to me, which I find awesome in rugby. No one has an ego. We are all just friends. That is pretty much why rugby is so cool.”

The next time you see Ciquera, it will be this weekend as your Free Jacks take on Old Glory DC at Veterans Memorial Stadium. Having recently set the record for the most-consecutive wins in MLR, New England are certainly riding a high.

DC have their own winning streak to maintain, the men from the capital having won the last two on the bounce after a 0-9 start to the season. It will be the weekends nationally broadcast game, so there is all the more reason to tune in, with Ciquera expecting a tough challenge on Saturday evening.

“Everyone has a mindset that they are a good team,” he said. “They have come off two wins, they have had a bye week, they have been preparing for us for two weeks, and I think everyone is taking them pretty seriously.

“I don’t think any thinks we are definitely going to win. So the plan will be the same as every week and we will be working on ourselves.”