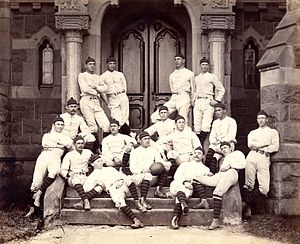 The colleges in the Eastern Football Association met annually to discuss the development of the sport, and, notably, to review the rules. Yale opted not to join the Association but continued to monitor changes in play, The Elis were convinced that eleven men represented the ideal number for rugby but were not successful winning the majority of votes to switch to the lower player number.

Matches featured fifteen-players a side, using traditional scoring that emphasized kicking for goals and not the touching down of the ball in the end zone for a “try.”  The RU Code specified, “A match shall be decided by the majority of goals alone.”

The ball was oval and fat in the middle (See above photograph), ideally shaped for kicking. Teams wore unforms consisting of tight-fitting jackets, canvas pants, colored socks in school shades, and cotton caps.

Each year afterward, other colleges started to play rugby in addition to the 1877, eight core cohort. For many years, the expansion was confined mainly to eastern schools that could travel (by train) to match venues nearby.

For seven years, from 1876 to 1882, rugby in America proliferated among thirty plus colleges and seemed on track to become the nation’s intercollegiate game of football.

Princeton and Yale excelled at rugby, contesting more matches during a season than the other colleges. In that era, and later when gridiron superseded rugby, these rivals played each other often for the mythical national championship.

One memorable Yale and Princeton rugby match occurred in November 1881. It demonstrated for the first time, contact football’s enormous spectator appeal when 10,000 fans watched the game inside the first of the three iterations of Manhattan’s Polo Grounds. The stadium was flanked by Fifth and Sixth Avenues between West 110th and West 112th Streets. Paying, probably, fifty-cents admission, the gate generated about $5,000, a sum unheard of for a sporting event in America. The two colleges returned to campus with an unexpected cash payout for the Athletic Department.

Over the next two decades this Yale-Princeton football contest would witness similar 10,000 spectator plus crowds. Alumni of both colleges arrived to the stadium in fancy horse drawn carriages from the swanky hotels on Park Avenue. Princeton or Yale won outright or shared the title for the intercollegiate football championship up to 1894.

As the Eastern Football Association rules committee met annually, new ideas were presented to reform rugby. One member, Walter Camp of Yale who played for six years, would propose revolutionary changes in the way the game was played. Camp’s dogged proposals finally succeeded, and, by 1883, the gradual conversion began to transform rugby union to gridiron football.