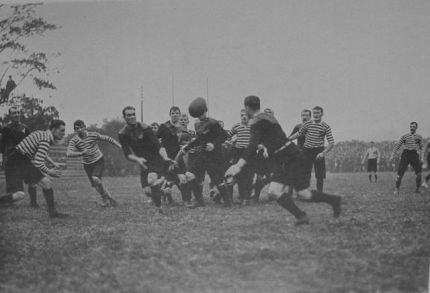 After the public uproar involving gridiron death and injury in 1905, colleges had two options; play football under the legitimately sanctioned new rules or abandon the sport. A few schools chose the latter, including, Columbia University, one of the original members of the first football union formed after the Princeton-Rutgers soccer-style game in 1869.

But there was a surprisingly third pathway that none who attended the eastern committees considered, a return to rugby union football.  With Walter Camp’s gridiron rules changes, the sport of rugby essentially disappeared save for the annual west coast contest between U. California and the University of British Columbia. (Rugby came to Cal in 1882.)

Also in 1905, rugby had not been played prominently in America for more than twenty-years. Many colleges, especially, in the Midwest, South, and West had never seen the game. And, decisively, gridiron attained a positive following among players and spectators as the official  collegiate sport of autumn.

The serendipitous happenings that led to rugby’s return in America’s Far West occurred from a disparate and unconnected chain of events. No one imagined that New Zealand’s European rugby tour in 1905 would represent the catalyst an ocean and a continent away to convince the universities of Stanford and California to switch to the rugby code.

In 1905, the New Zealand Rugby Football Union (NZRFU) set off on a six-month tour of the United Kingdom, Ireland, and France. A squad of twenty-seven players sailed on July 30th, arriving in England six-weeks later on September 18th.

The team wore black jerseys as usual, and, for the first occasion, black shorts so that the newspapers started to refer to the national fifteen as the All Blacks. During the following five-months, the team won 32 matches (23 shutouts) against a single loss, a 3-0 test match defeat to Wales. The January 1906 game with France at the Parc des Princes was to be the final contest of the many month tour.

The New Zealand Prime Minister followed the spectacular success of the rugby team, which generated sparkling accolades in the U.K. media and also in the foreign press, In effect, the All Blacks rugby dominance had put the small, island nation of New Zealand on the world’s map.

In order to continue the global awareness of the native team, the PM decided to extend the tour – and prolong the good publicity – by sending it across the Atlantic to the United States.  In January 1906, the All Blacks arrived in New York City, where it played an exhibition game in Brooklyn against a ragtag collection of ex-Pats. The team travelled next to San Francisco where two games were scheduled in February against a visiting all-star rugby side from the Canadian province of British Columbia.

The presidents and the faculty at Stanford and California, Berkeley, in 1905 debated whether to drop gridiron and replace it with rugby or soccer. The “Big Game” –  the popular gridiron football contest between the schools begun in 1892 – was perceived to inhibit interest in academics. The annual event resembled the hoopla of football rivalries back east, encouraging,  banners, parades, bon fires, and intense alumni interest.

They were unified in finding a way to retain some autumn sport but not gridiron even with its  new rules,

On February 10, 1906, the All Blacks met British Columbia at Stanford winning easily 43-6. Three days later on February 13, the New Zealanders prevailed again 65-6, the game played in Recreation Park, San Francisco.  Wheeler and Jordan witnessed the matches and came away with a favorable appreciation for rugby union, a sport less violent than gridiron with more free-flowing and faster action.

The All Blacks ended the tour with a 34-1 record. As impressive was the scoring disparity, the NZ fifteen scored 976 points for to a mere 55 against, and also achieving 25 shutouts.

In Match 1906, the Stanford Athletic Department voted to play rugby for the upcoming 1906 season, The college newspaper was disappointed: “Football is that game which we want, and not some imported English product.” The protest went unheard; Jordan and Wheeler ruled their universities autocratically. Their decision was law.

Stanford would send a coach to British Columbia for rugby training.  California sent its own representative to England and Wales for the same reason. Eventually, Pomona College (Los Angeles). Saint Mary’s (Oakland) and Santa Clara would also convert to rugby. High schools from the Bay Area to L.A. would drop gridiron to play “the English product.”

Astonishingly, rugby union football in America, a sport once moribund and forgotten, had been reborn in California from a timely visit by the New Zealand All Blacks.