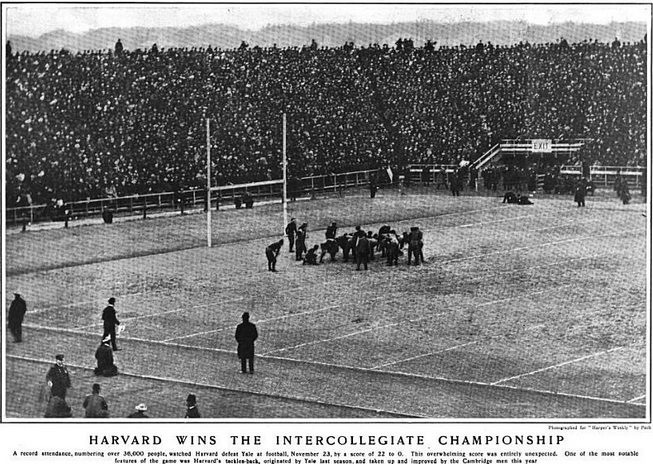 In review, an article in the spots page of the Chicago Tribune in 1905 uncovered the horrific truth that gridiron football accounted for nineteen-deaths nationally in the 1904 season. The sport had spread exponentially, abetted from Walter Camp’s first rules revisions in the 1880s. Some twenty-years later, it had gained significantly in popularity, adding teams in eastern colleges, (high schools and prep schools, too) and expanding into the South and Mid-West for the first time.

However, the shocking newspaper revelation of fatalities and serious injuries had to be addressed after journalists and educators expressed negative opinions about the imminent dangers of the sport. What could be done to reduce the violence? The options were polarized: reform or abandonment.

When news of the Tribune’s article landed on the White House desk, President Roosevelt realized that the nay-sayers clamoring for football’s cancellation had found a forceful political forum to challenge the game’s existence. T.R. also knew his voice from the bully pulpit of the presidency would carry weight and importance to implement rules changes. (N:B. There are reputable media publications today that claim Roosevelt could have ordered changes in the game by presidential fiat. This version is myth making bunkum; the U.S. Constitution provided no such executive power, except for the military teams under federal governance.)

The president never played football at his alma mater, Harvard College (Class of 1880),   but was a firm supporter of the game. He was especially proud of the undefeated Harvard 1898 squad that went 11-0. Roosevelt attended the gridiron dinner in Cambridge to celebrate the undefeated season, offering an added cachet to the event as the recent Rough Rider leader from the short-lived Spanish American War. For six years, between 1897 and 1902, the Harvard eleven recorded a splendid 64-3-2 winning record, including, two national championships.

Roosevelt was convinced that reorganizing football would provide the key to reducing its violent nature. His proactive stance assembled seven men to the White House on October 9, 1905. In attendance were football coaches Walter Camp of Yale, Arthur Hildebrand of Princeton, and William Reed of Harvard. Also, the heads of the three colleges’ alumni associations, and, finally, Elihu Root, the Secretary of State,

T.R. urged the gathering to find new processes to eliminate the on field brutality and return fair play to the game, The men pledged to do so,. The meeting generated national awareness. But no specific remedial actions arose from tbe group Then in November came the shock revelation of 1905’s gridiron season: 18 deaths in the country.  It became evident that well-meaning, good will pledging was insufficient if football was to change,

The Chancellor of New York University, Henry MacCracken, took up the task of scheduling a second meeting among thirteen colleges in December 1905. A month later, in January 1906, the original group expanded to 62 teams, indicating the movement became a truly representative national body determined to follow Roosevelt’s dictum for football’s reform.

The wide-ranging scope of attendance effectively ended the Yale, Harvard, Princeton control of the Football Rules Committee much to Walter Camp’s annoyance, The newly formed group called itself the American Intercollegiate Football Rules Committee with the specific goal to create procedures “to squelch brutality and all forms of unnecessary roughness.” The time had come for specific changes.

The introduction of the forward pass represented the most notable rules change, one that would radically alter football over the next hundred years.

During the committee’s meetings, the subject of a return to rugby was also considered. This idea led to a hybrid concept, keep gridiron with the new rules but widen the field to rugby proportions. The expanded field space would decrease serious head-on-head collisions. The proposal was rejected outright by Harvard, which had spent millions constructing Soldiers Field that opened in 1903. The field at the newly built stadium could not be widened.