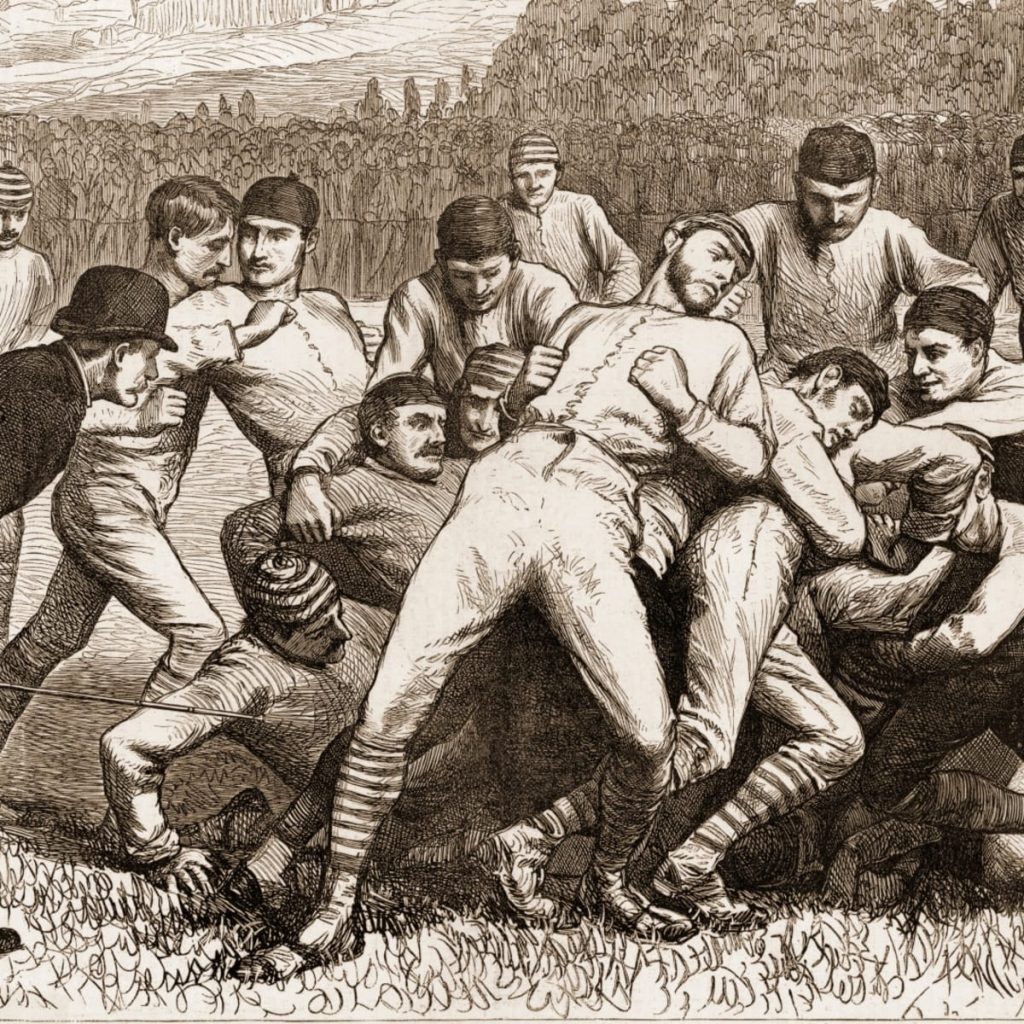 A magazine cartoon depicts two, tiny mammals peering out of foliage in the immediate aftermath of the meteor slamming into the Yucatan (Mexico) Peninsula sixty-six million years ago that eradicated the dinosaurs. One animal queries, “Hey, where did all the big guys go?”

Gridiron football did not displace rugby overnight from a single catastrophic event but gradually over a fifteen-year period. During that time, these similar contact sports (oval ball, kicking, running with the ball, and tackling) continued side by side for a few years under the title of “rugby”, and then gradually, to just “football.”

Basically, rule modifications advocated by Yale’s Walter Camp predominated to change forever how the two football games were played, The significant Rules Committee revisions over the following years are highlighted as follows:

A review of Yale’s rugby football teams in 1882 and 1883 illustrates the marked effect of the newly created scoring totals:

In net, under the new rules, Yale rugby increased its scoring totals by an amazing 501 points with but two points scored against. And in 1883, only its main rival, Princeton, played competitive football against the Elis. Princeton also experienced a significant change in scoring, going from 44 points tallied in 1882 to 270 in 1883.

In the past, the prior low scoring results generated no negative newspaper comments when matches were decided solely by the one-point goals. (Remember, according to the RU in England, only goals determined a match result.) However, with the revised scoring now registering the vast difference in points, sports journalists had no choice but to make negative statements. In that 1883 Yale-Rutgers game, one scribe penned “…a 92-0 Yale rout from a one sided, fifteen goal total.”

The rugby football rivalries of Yale-Princeton, Yale-Harvard, and Harvard-Princeton generated publicity, first, from sports journalists, and, after, from the newspaper reading public. The contests were played in New York City, mainly, at the first Polo Grounds stadium on West 110th Street.

These annual matches often determined the “best” rugby football team in the nation when undefeated Yale and Princeton sides met. The contests received full coverage from New York’s newspapers. Here are some excerpts from that Yale-Princeton 1883 game that appeared in “The Sun.” (New York City)

The term “rugby” would be used until the colleges’ playing fields had to be lined in five-yard squares to demark first downs. To some, the pitch resembled the bottom of an iron. and the name “gridiron” achieved universal usage in the press. It was at this juncture, that the sport of rugby in America became as extinct as the dinosaur.