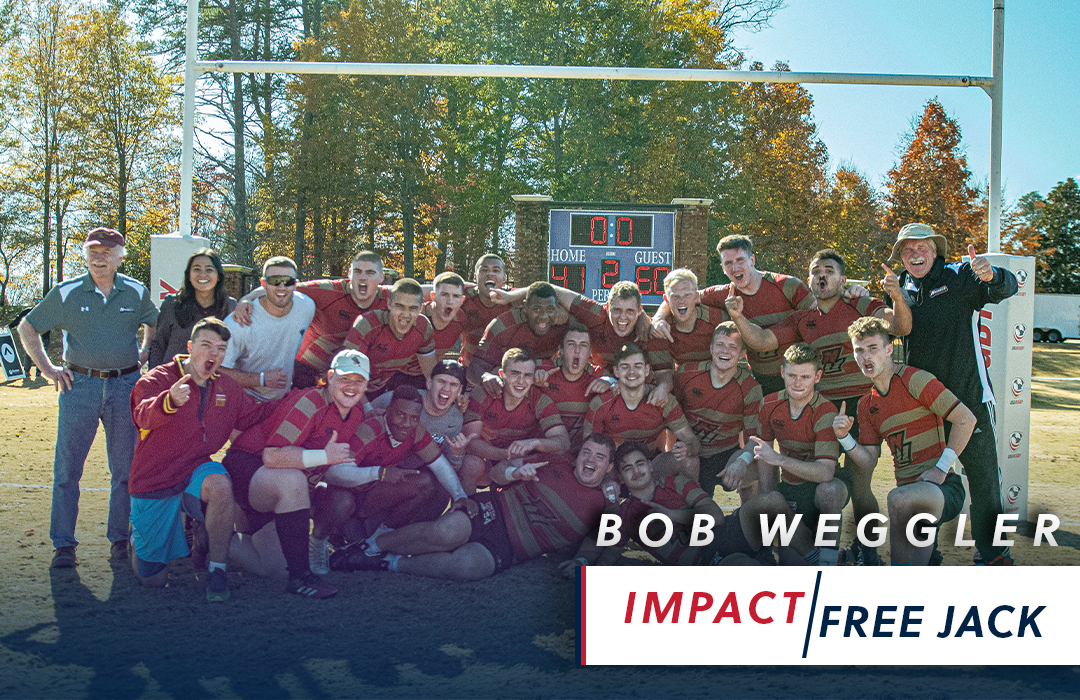 Impact Free Jacks celebrates the stories, efforts, and people of the New England rugby community who inspire a players, leaders and future Free Jacks. The bi-weekly Q&A series explores the journeys of players, coaches, officers, and ambassadors of the game.

Free Jacks: So, Bob, can you tell us a little about yourself and your rugby background?

Bob Weggler: Of course! I began playing rugby at the age of 16. As a junior in high school I joined Old Blue (New York) and never looked back. As an undergrad at Cornell, I compete all four years on the first side, capturing the Upstate Rugby Union title as a freshman. At Cornell, we toured England with Old Maroon RFC, playing matches against sides like Wasps and Fylde RFC. After graduating college in 1979, I spent a year playing rugby in Wales with the Abergavenny First XV.  After returning to the States, I rejoined my former team in New York, Old Blue, where I played in the 1980, ’81, and ’86 Division 1 Club National Championships.

FJ: And how did you make your way into coaching?

BW: I’ve been coaching now for over 33 years! I began at my alma mater, Cornell, before moving onto Amherst College and Colby College, where I helped the team to back-to-back Final Fours in 1999 and 2000. In 2001, I started coaching at Norwich University, where I’ve remained since. The program has really taken off in recent years – winning, four straight conference 15s titles and three straight 7s championships. Between 2016-19, I helped the Cadets to a 21-game conference winning streak.

Each spring, I serve as the director of the annual Chris Munn’s 7’s tournament, which helps raise awareness for ALS (Lou Gehrig’s disease) in honor of Norwich rugby alum Chris Munn, who is living with the disease. I’ve also served as the New England Collegiate Rugby Conference Commissioner as well as on the Board of the Vermont Youth Rugby Association.

FJ: Quite the career! Now are there any changes you’d like to see made to help grow the game of rugby in New England?

BW: Most importantly, we need to start investing more in developing players as well as coaches at all levels. From a gameplay standpoint, I’d like to see more of an emphasis on kicking skills at an earlier age – and to focus more on the tactical side of kicking as players progress through the age groups.

FJ: What are some of your favorite rugby memories?

BW: Tough question! First would have to be playing my first match for Old Blue at age 16 – I originally went to just watch the match, but because they were short on players, they threw me in on the wing with the C side. I’d never practiced before but somehow I scored 3 tries! I’ll never forget playing at Cornell or with Abergavenny in Wales, and I’m so proud to have coached some awesome groups of players to Final Fours with Colby and Norwich.

FJ: Last question – if you could choose any song to be the Free Jacks’ 2021 Stadium song, what would it be?