Impact Free Jacks celebrates the stories, efforts, and people of the New England community who inspire the next generation of players, leaders and future Free Jacks. The series explores the journeys of players, coaches, officers, and ambassadors of the game and how they are making a difference.

Devin Ibañez is someone who embodies all of those qualities and more as he continues to makean impact both on and off the field. Devin was part of the inaugural Free Jacks team, having represented New England in the 2019 exhibition season and the Cara Cup. A standout loose forward for Mystic River Rugby Club, a gold medal winner with the USA Maccabi Rugby team in 2017, and a mentor and coach to many aspiring rugby players, Devin is also the first openly gay Major League Rugby player.

On December 29 last year, while we were all getting ready to celebrate the end of 2020, Devin made the decision to come out in a series of impactful social media posts showing photos of himself, the rugged long-haired athlete with his partner, Fergus.

“I am openly gay,” Ibañez wrote to Facebook and Instagram. “This is something that is not a secret to those close to me and even several people not close to me. But I always felt a need to keep it separate from my rugby career.”

Devin took to changing his social media handle to ‘@ThatGayRugger’ to embrace his sexuality, share his story, and become an advocate for other LGBTQ+ athletes.

Devin had a different experience than most in the rugby community. Before openly coming out as gay, he played a lot of rugby with a number of different teams. His career has taken him to New Zealand, Australia and England and he also represented USA in 2017 Maccabiah Games.

While we celebrate the pillars of the game of rugby, those of integrity, passion, solidarity, discipline and respect, it is important to recognize that we uphold these values daily, on and off the field.

Devin noted that this was not always the case.  On his collegiate team he often heard comments directed towards another player on the team who was openly bi-sexual. Experiences like this put Devin in a really difficult situation. Though he never feared any acts of violence against him as a result of his sexuality, he feared the loss of opportunity and the thought that he might become a distraction. He felt the rugby community overall would be accepting of his sexuality, but feared that instead of being known as “that really talented rugby player” he would become “that gay rugby player”.

With his past experiences in mind and his desire to help inspire others in a similar situation, he embraced the handle ‘@ThatGayRugger’. This was his idea of leaning into that role that others may label him as. He chose to embrace this persona in efforts to clear a path for the next generation of openly gay rugby players. Ibañez especially does not want them to experience the same fear he felt.

Since his coming out, he has received enormous support from the rugby community. Old teammates and friends have reached out to show their respect and appreciation. On top of that, his Instagram has shot from zero followers to over six thousand… and counting. The fact of the matter is, rugby may very well be the most accepting sport in the world, but if we subscribe to that notion, it’s a form of complacency.

Devin detailed for us that though the majority of our experiences in this sport may be tremendously terrific, it’s important to listen to the people who may not have had that same experience or feeling of inclusivity within the sport.

“Starting that tough conversation with fellow ruggers is extremely important for the advancement of further inclusivity,” commented Devin. “Listen to the experiences of people who may not have felt included during their time playing, and then ask them about the ways they did feel included and what that meant to them and the contrast of that.”

Devin is bringing light to these issues by pushing our community to have these difficult conversations.

“The most important thing right now is to understand that as we are still holding that all-inclusive notion about our sport, we also just became the first ever sport to have its international sporting body [impose] a blanket ban of trans athletes from international competition,” commented .

It’s these topics and conversations that all of us can have to help push for change and show our support.

“The biggest difference [in an ideal world] is going to be that I can go in there and just focus on playing rugby. No outside noise in my head about making a mistake and the implications people will have about me for making that mistake. I can just play and express myself in that way.”

Devin believes that the next time he sets foot on the pitch, he will do so with a more balanced state of mind. He will be able to channel that inner anger he used to hold back. All those years of picturing the opposing side as homophobic naysayers will feed his drive as he looks to help lead his team to victory. Devin plans to use the ability to channel that energy for the better of himself and his team.

Devin has fully recovered from his recent injuries, the main one stemming from issues with his internal organs. He plans to get back on the pitch as soon as he can and hopes to see himself back in a Free Jacks jersey in the near future. It’s also important for him to be close to his partner, Fergus, after being separated by the pandemic, so he continues to look for playing opportunities in England as well.

A great rugby player and an even better person.

What’s next for Devin?

“Like other setbacks suffered in my career, I have come back from this injury stronger and more determined. I will continue to push myself to play the highest level I can in hopes of being as visible as possible to athletes around the world. My biggest playing goal is to earn captaincy of the USA Maccabiah team for the upcoming 2022 World Maccabiah Games. I would also be honored to play with the Free Jacks again in the future. However, after a year separated from my partner due to the pandemic, I would love the chance to play closer to him in London.”

“I also hope to travel the world in the coming years and talk about my experiences while advocating for the LGBTQ+ and BIPOC community and for equality in sport. I want to be as involved at the grassroots level as I can through coaching as well. I want to take as many opportunities to inspire and motivate the next generation of LGBTQ+ athletes as possible. I hope to show them that rugby is a space where they can feel safe and celebrated. I want to start with the rugby community right here in Boston, so anyone who has ideas on ways for me to get involved and make a difference please reach out!” 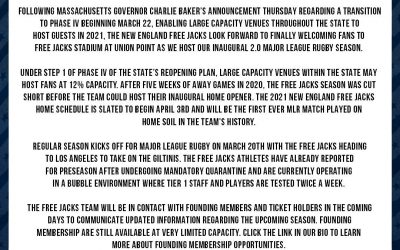 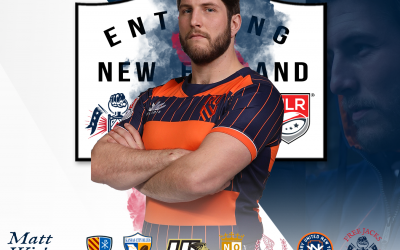 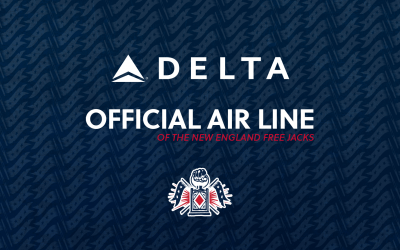 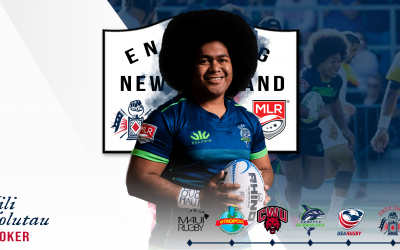