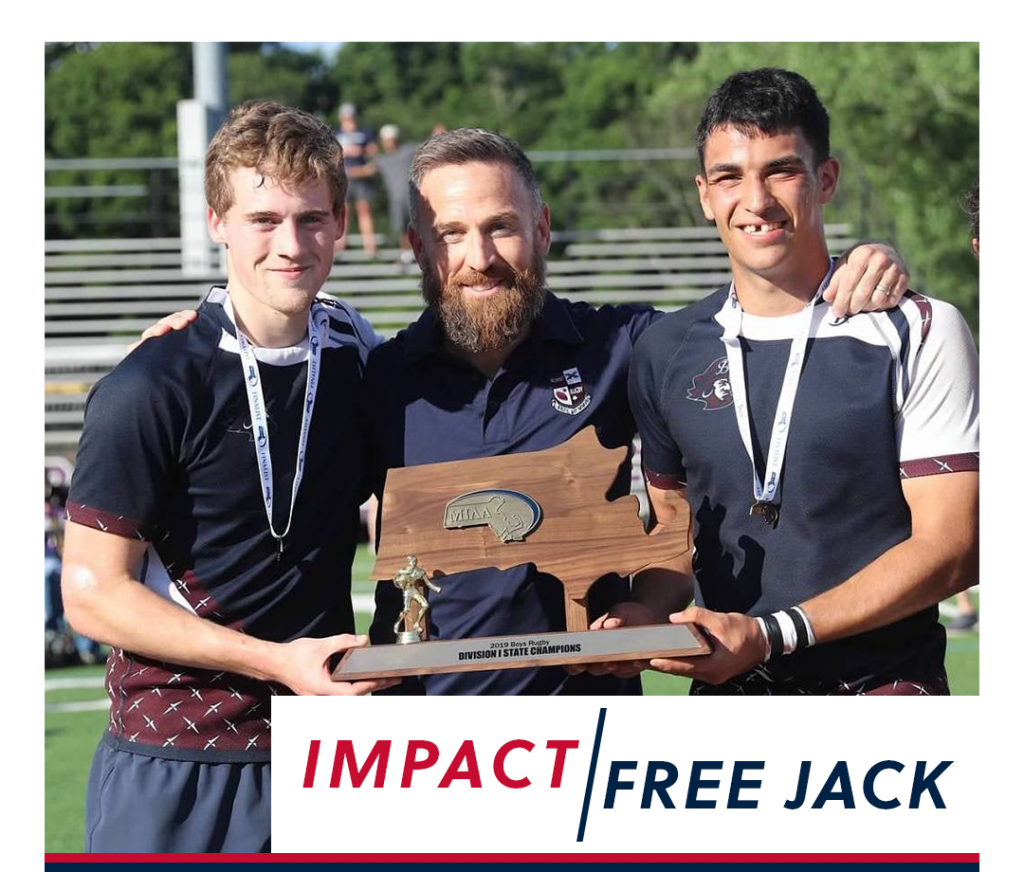 Impact Free Jacks celebrates the stories, efforts, and people of the New England community who inspire the next generation of players, leaders and future Free Jacks. The weekly Q&A series explores the journeys of players, coaches, officers, and ambassadors of the game and how they are making a difference.

In the spotlight this week is Greg Bruce, Boston native, former Boston Irish Wolfhounds and New England Selects player and the current Head Coach of Belmont High School Rugby Football Club and recipient of the 2020 MIAA Boys’ Rugby Coach of the Year Award.

Free Jacks: Can you tell us a little bit about how you became involved with rugby?

Greg Bruce: My playing career began in college at Southern Connecticut State University and grew from there! I joined the Boston Irish Wolfhounds after graduation in 2001 and was honored to be a part of the team through the spring 2005 season, winning the 2003 and 2004 USA Rugby D1 National Championships. I was abroad between 2005-2006 and was lucky enough to play for a season with Owaka Rugby Club on the South Island of New Zealand. I also played a bit of 7’s in Fiji and participated in the Lalomanu 7’s Rugby Tourney in Samoa – an absolutely incredible experience. Today, I continue to play with the Boston Irish Wolfhounds Old Boys side – the Greyhounds – and can’t wait to get back on the pitch with all my teammates!

FJ: And how did you find yourself coaching the game?

GB: My coaching career began during my first year teaching at Belmont High School in the fall of 2006. I was asked to start the school’s rugby program and have been with the team ever since! It has been an incredible ride and I have been so fortunate to have met so many wonderful people along the way including the players, their parents and the other coaches who make Belmont Rugby what it is today.

In 2012 I was invited by Northeastern University Head Coach, Jamie Green, to join him as the backs coach and head 7’s coach. During my time at Northeastern we participated in the USAR Collegiate 7’s National Championships as well as the 2013 and 2014 CRC’s.

I’ve also been lucky enough to have travelled and coached overseas. First in Guatemala, helping my friend Josh Macy with training sessions and local clinics and later in the Kashmir region of India, where we ran a series of clinics for the Jammu and Kashmir state rugby teams. It was a surreal experience. Apart from a grenade attack in the city during my stay, it was one of the richest cultural and rugby experiences of my life.

FJ: What changes would you like to see in the New England rugby landscape to ensure the game’s continued development?

GB: That’s a question with a lot of answers, but I would say the biggest things for me boil down to three areas.

First, there has been a definite increase in opportunities for young people to play rugby the past few years, which has been great to see and be a part of. The next step for us as a region, in my eyes, would be to create a system that integrates our high-performance opportunities so that we are less club-driven and more player driven. We can come together to look creatively at our calendar, our weather cycle, and our resources and promote a system that allows kids to play for their high school programs, their summer club 7s sides and then, if they have the desire, time and aspirations, to pursue a regional academy/provincial type of pathway to fill out and supplement the rest of the year.  With this said, I do have some trepidation around this model as I do not want rugby to turn into club soccer, basketball, lacrosse, etc. where money has become a driver for many of these programs and creates some major equity issues.

Second, I’d like to see more outreach and support for school-based rugby programs, and improved coach training, as well as an increased emphasis on coach retention.

Finally, we should strengthen our support for referees in New England. Whether it’s an increase in grassroots recruitment – perhaps by creating pathways through the local club system for young rugby players to become referees – or by providing more opportunities for development for current referees.

FJ: What is your favorite rugby memory?

GB: This is a pretty tough one to be honest as any old rugger like myself would probably say, but I’ll do my best. Sadly, no way I can limit it to one so I’ll give one from coaching, one from playing, and one from life.

Without a doubt, the first day of practice at Belmont High every single year. To look out at those kids, the looks in their eyes, the joy beaming from the coaches as we get ready to embark on our annual campaign and whatever it may bring, there’s just nothing like it.

As a player, the most special games I’ve played in are the ones where my daughters were there, and they run on the field and hug me afterwards. I remember seeing this happen a number of times as a younger man and thinking how happy that old rugger looked, and not that old rugger is me!

Finally, my wedding day: I was marrying a woman who supported me through my collegiate rugby days, my early Wolfhounds days and who continues to support me today through it all.  On the day, we were married by one of my college teammates, my best man was a college teammate, and two Wolfhounds teammates were in our wedding party, one of which is now my brother-in-law.  There was also a large presence of rugby friends and family there and speaks to the community that I love so much.

GB: I’ll qualify this as saying it is my favorite rugby quote:

Fergal Heir, former Head Coach of the Boston Irish Wolfhounds, used to say this all the time. I have no idea where it originates from, but it has always stuck with me and likely always will.

FJ: If you could choose the Free Jacks stadium song for 2021, what would it be?

GB: The Buzz by Hermitude