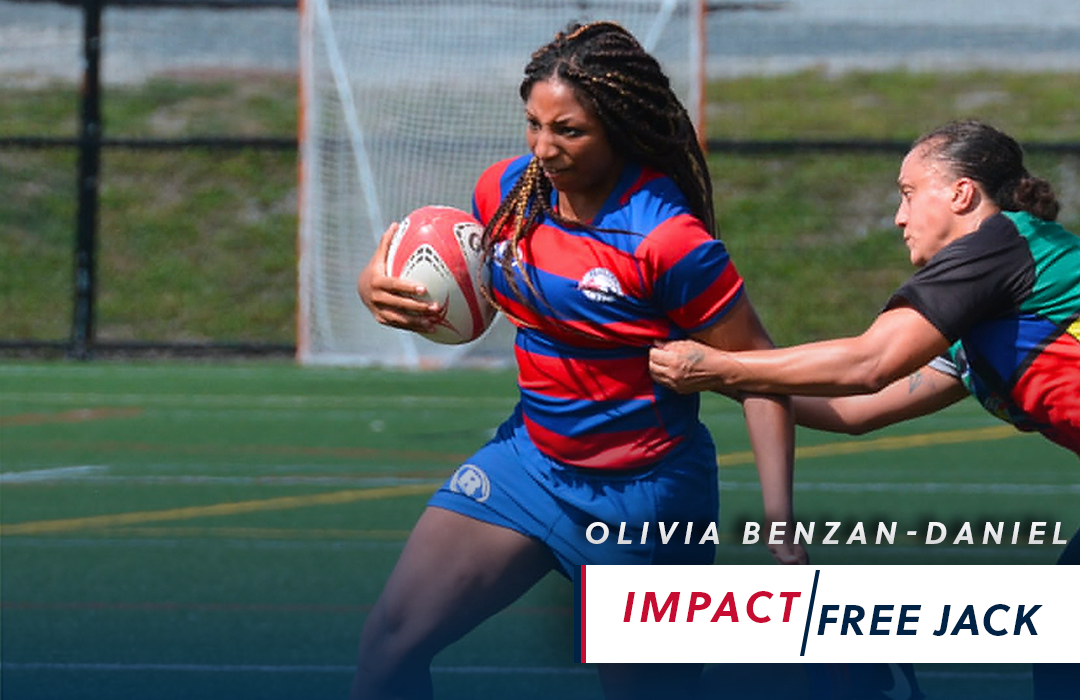 “We work on being the best at the things that take no talent. Effort and commitment, supporting and bringing your teammates up take no talent at all. I love how we can emphasize the importance of hard work independent of how much talent you may possess.”

Impact Free Jack celebrates the stories, efforts, and people of the New England community who inspire players, leaders, and future Free Jacks. The weekly Q&A series explores the journeys of players, coaches, officers, and ambassadors of the game and how they are making a difference.

Free Jacks: So, Olivia, can you tell us a bit about yourself and your rugby background?

Olivia Benzan-Daniel: First of all, I’m super honored to be selected for this series. A lot of times, you can’t be what you can’t see, so if my rugby story inspires someone to get involved in the game or more involved than they already are, I’d call that a success.

I started playing rugby in Spring 2011, during my first year at Holy Cross in Worcester, MA, so I’m coming up on 10 years as a player! Shortly after I graduated in 2014, I moved back home and began playing with Beantown RFC – the Women’s Premier League team in Boston. I’ve been playing with them ever since and I was lucky enough to be selected as a 2019 WPL East All-Star, along with a few of my teammates! I’ve been a forward most of my career – I’m primarily a prop now, but I’ve had seasons at lock flanker, outside center, 8-man, and wing.

FJ: How did you find your way into the coaching side of rugby?

OBD: I started coaching pretty soon after graduation – and actually got my start in 2015 as the Women’s Head Coach at my alma mater, Holy Cross. With my playing career as my primary focus, I transitioned to an assistant coaching role at Holy Cross for more flexibility with my Beantown schedule. After three years at Holy Cross, I was brought in during the fall of 2018 as the Co-Head Coach of the Brandeis University Women’s program and have since taken on the primary Head Coaching position. When I began at Brandeis, the team only had 3-4 players. Now, we’ve had 20-25 players for two years in a row!

In January of 2020, I helped found the St. Mary’s High School Girls Rugby Program. Spring 2020 was set to be our first season – but for the obvious reasons we’ve had to postpone until 2021. It was disappointing not to be out there this spring, but I can’t wait to get things started again soon.

FJ: If you could make any changes to improve the New England Rugby landscape, what would they be?

OBD: I’d like to see a few improvements to the youth game and the rugby community on the whole in New England. First, we’ve made great strides in youth rugby, but we need to keep our foot on the gas. Rugby’s core values not only grow better players, but better people off the field as well. I’d like to see us showcasing these values to parents – by introducing rugby in school as part of a physical education curriculum, and increasing its accessibility across inner cities as well as suburbs. Rugby can be as accessible as we make it, and more access fosters more opportunities.

In regards to the New England rugby community as a whole, these two ideals are fairly connected. With a rugby population as dense as it is in New England, we have an immense number of teams existing across divisions, age levels, and genders. If we came together, we could be an unstoppable hub of rugby in the U.S. I’d like New England to build itself into a collaborative environment where all levels (senior, college, high school, & youth) are all sharing resources and information to further the game and help each other grow.

Finally, I see former or retired rugby players as our greatest untapped resource when it comes to outreach. You have the committed individuals that stay involved in some way, but there are so many others that retire and leave rugby behind – many of whom are unaware of the ways they can still be involved now that they are done playing. Coaches, referees, and administrators are integral parts of the game’s success. Recruiting former players and providing them with resources on how they can stay involved in the game is one of the many ways we can move forward and get where we want to be as a sport.

FJ: Now what is your favorite rugby memory?

OBD: It’s so hard to choose just one! So I’ll give you one as a player and one as a coach.

As a player, it would have to be a try from the last match I played in. It’s one of my favorite rugby memories because it was a moment I had essentially spoken into existence during warmups. I had told a teammate I wanted to score that day. It was my last game before my season ended for a coaching opportunity, and it was something I hadn’t really managed to do much all season. I didn’t let it distract me from our larger game plan as a team and toward the end of the match, the opportunity presented itself. There’s something uniquely incredible about convincing yourself you’ll do something uncertain and then having it come to fruition.

As a coach, I would say when I ran into two children from a youth rugby clinic a couple weeks after the clinic had ended. I think they were about 4 and 6 at the time, and they were so excited to see me that they ran up to me and gave me a big hug. They told me how much they liked rugby and wanted to play again. Seeing those children light up talking about rugby is one of my favorite memories because it reminds me of why my emphasis on fun is such a necessary part of my coaching style.

OBD: Another tough decision! These are my top three. They all speak to the different parts of who I am as a person and a member of the rugby community.

“Be the change you want to see in the world” – Gandhi

I actually didn’t know Gandhi said this for the longest time, and or that the quote ended with ‘in the world’. “Be the change you want to see” is a phrase that has motivated me to do a lot of what I’m doing. I’m always looking for ways to improve myself and the space around me whether that’s inside or outside of rugby. If you see a problem, lead the charge to fix it. If you want more positivity in the room, bring the positive energy!

I saw this quote on the wall when I went to the World Rugby Hall of Fame. It resonated with me immediately because I never play for just me. I focus on being a good teammate because I enjoy being a part of something bigger than myself. Rugby is a great example of community and teamwork. When we work as a team, we can celebrate our successes together.

“If you focus on the things that take no talent, you will get where you want to go.” – Alycia Washington

My coach mentions the same sentiment at almost every training because we work on being the best at the things that take no talent. Effort and commitment, supporting and bringing your teammates up take no talent at all. I love how it emphasizes the importance of hard work independent of how much talent you may possess.

FJ: Finally, if you could choose any song in the world to be the Free Jacks’ 2021 Stadium song, what would it be?