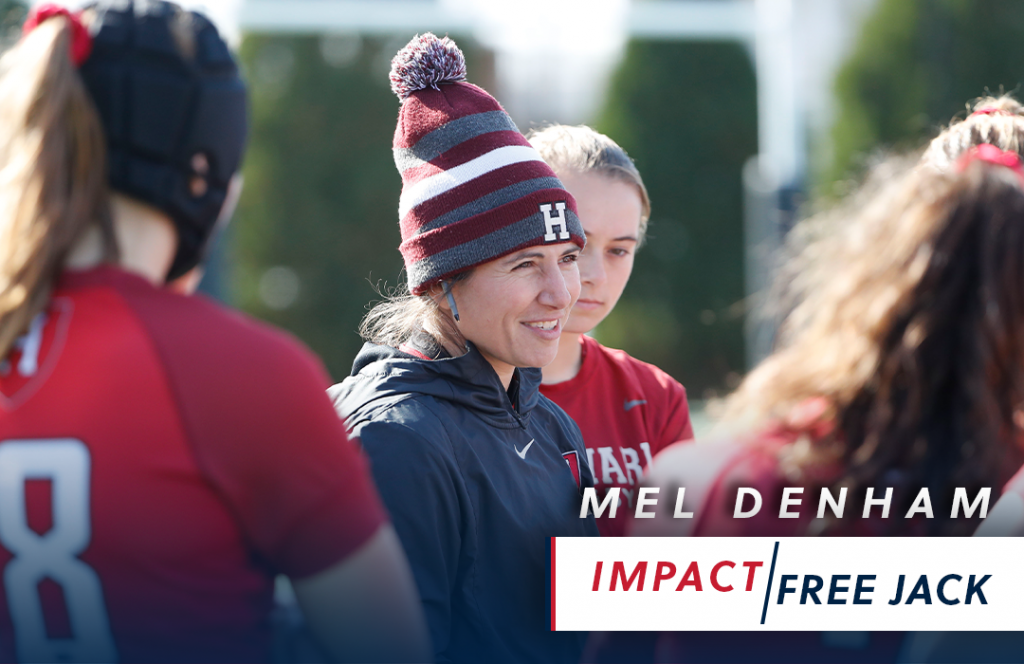 Impact Free Jack celebrates the stories, efforts, and people of the New England community who inspire players, leaders and future Free Jacks. The weekly Q&A series explores the journeys of players, coaches, officers, and ambassadors of the game and how they are making a difference.

Free Jacks: So, Mel, when did your rugby career begin? How did you find your way into the game?

Mel Dunham: After discovering rugby while in college, I joined my local club – Beantown Rugby in the Women’s Premier league – after graduation. From there, I represented the Northeast in 7’s and 15’s, and was lucky enough to be a member of the USA Women’s 15’s National Team between 2007-2014, earning 22 caps. I made my debut against England, was a member of the 2010 Women’s Rugby World Cup squad – finishing 5th in the tournament – and was selected as part of the Eagles extended training squad for the 2014 World Cup.

FJ:  When did you make the transition into the coaching side of the game?

MD: I started coaching as a volunteer assistant coach for Radcliffe Rugby, the Harvard Women’s Rugby Program when it was competing as a club from 2010-2012. After winning the 2011 National Title, I helped facilitate the elevation of the program to full varsity status at Harvard. I then accepted my first full-time head coaching position for the American International College, where I stayed from 2012-14. I then became the first head coach of Central Washington University’s recently elevated women’s varsity rugby team, helping them reach 3 national championship appearances in both 15s and 7s from 2014-2017.

Since 2017, I have been the head coach for Harvard Women’s Rugby, which is an NCAA program, where I have helped lead them to a national semi-final appearance, two finals appearances, two Ivy League Championship titles, and most recently the D1 National Championship title last season. I am also Assistant Coach for Beantown in the WPL.

FJ: What changes to the rugby landscape would you like to see made to further develop the game in New England?

MD: I’d like to see more investment in grassroots rugby and more equity and opportunity in the women’s game. I want women to be receiving the same opportunities as men in rugby.

FJ: What is your favorite rugby memory?

MD: For me, it’s more about those memorable teams and seasons that really stand out. Being a part of a team that has a strong culture, where everyone is aligned and really working towards a collective goal, and enjoying it! As a player, the 2010 World Cup squad was one of those teams. As a coach, I would say that winning the National Championship with Harvard last year at our home stadium was incredibly special, and a great reminder of how far the game has come.

MD: I don’t have a favorite quote! One thing we say a lot here at Harvard though, is “pressure is a privilege”. It’s a great reminder that when you are striving for excellence and have pressure on you to perform well, to be grateful for the opportunities we’ve been given to earn that privilege.

FJ: Final question – if you could choose any song in the world to be the Free Jacks’ 2021 Stadium song, what would it be?