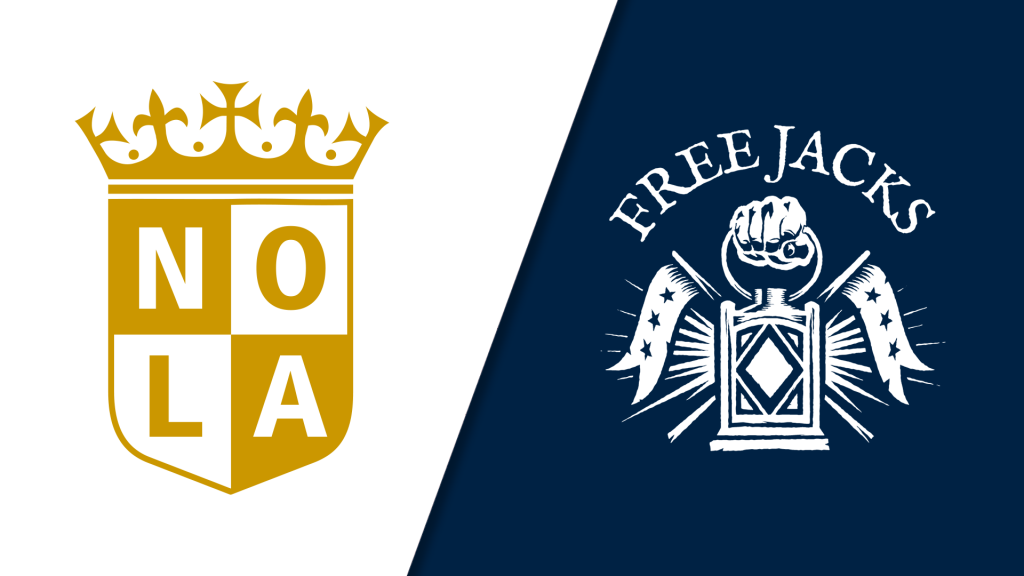 The New Free Jacks were unable to come away with the victory Saturday night, falling to the NOLA Gold 31-22.

The game began with both sides stalemating at 0-all for the first 15 minutes. Both NOLA and New England traded impactful tackles, line breaks and near-scoring efforts but were unable to cross the try-line.

The home team were the first to get points on the board, thanks to the hard work of their forwards. NOLA’s Dino Waldren picked to the side of a attacking ruck a meter out from the try line to score the first try of the match.

New England found their opportunity to answer back not long after. Following a penalty at scrum-time, the Free Jack’s Tadhg Leader kicked to touch and gave the Free Jacks their first opportunity at a lineout inside of the NOLA 5-meter line.

Hooker Sean McNulty found his target and the Red & Blue maul did its job. The maul pushed its way over into try line, allowing John Poland to get his first score of the night. Tadhg kicked a successful conversion, leaving the game tied at 7-all.

NOLA was the next to responded in kind with a try. Nikola Bursik found the try-line in another series of pick and goes just outside the one meter, putting the home team up 14-7.

Before the half, New England found some luck moving the ball swiftly through the back line, however NOLA’s defense remained resistant to any significant advancements. Tadhg Leader attempted a shot at the posts shortly before the halftime whistle, but it would sail unsuccessful, sending the Free Jacks into the sheds down one converted try.

The second half began on a high note for the Free Jacks. Free Jacks offense was able to display their quick-strike capability on the attack, encapsulated perfectly by a Danny Collins line break that brought him to the doorstep of the NOLA in-goal.

With the momentum now swinging in their direction, the Free Jacks refused to let up, as John Poland proceeded to set up a series of pick-and-go phases to test the Gold’s goal line defense. After a flurry of hard charging runs from a bevy of forwards, it would eventually be Conor Kindregan to get the try, closing the gap with NOLA at 14-12.

With the lead now within striking distance, the Free Jacks began to press the Gold on defense harder than ever, contesting hard at every breakdown, before eventually managing a steal in a NOLA lineout.

The turnover would spark a short kicking duel between the two sides, before NOLA was eventually forced to find touch, giving New England a shot at the lineout just outside of the Gold’s territory. After the throw in, The Free Jacks began to run phases, seeing a host of great passes and meters gained.

The Free Jacks found their next try, thanks to a beautiful array of well-timed passes between Sam Beard, Poasa Waqanibau, and John Poland that advanced the team quickly into NOLA territory, before eventually allowing Liam Steel to place the ball to ground. With that, New England would have its first lead of the night at 17-14.

Free Jacks compounded their efforts, stealing yet another NOLA lineout in their own territory, and stretching the Gold defense thinner than they were clearly comfortable doing.  The rate of pace by the New England attack would open the gaps just wide enough for Beaudein Waaka to dart through before offloading to Naulia Dawai. A spectacular behind the back, flick pass to Poasa Waqanibau who sent the ball to oncoming John Poland led to the Free Jack’s 4th try of the match and John Poland’s 2nd

Beaudein Waaka’s first and only conversion attempt of the night would sail wide left, but New England would still extend its lead out to 22-17.

Despite the mounted lead, it wasn’t meant to be for the Free Jacks in the Big Easy. New England would see several more phase groupings where they exhibited good ball movement and put on some good pressure defensively around the breakdowns, even coming close at several points to putting their lead out of reach for the Gold.

However, two backbreaking interceptions and a pair of drive killing penalties would eventually give way to two NOLA tries by Scott Gale and Cam Dolan, ending the game with a final score of 31-22.

Stats at a Glance: