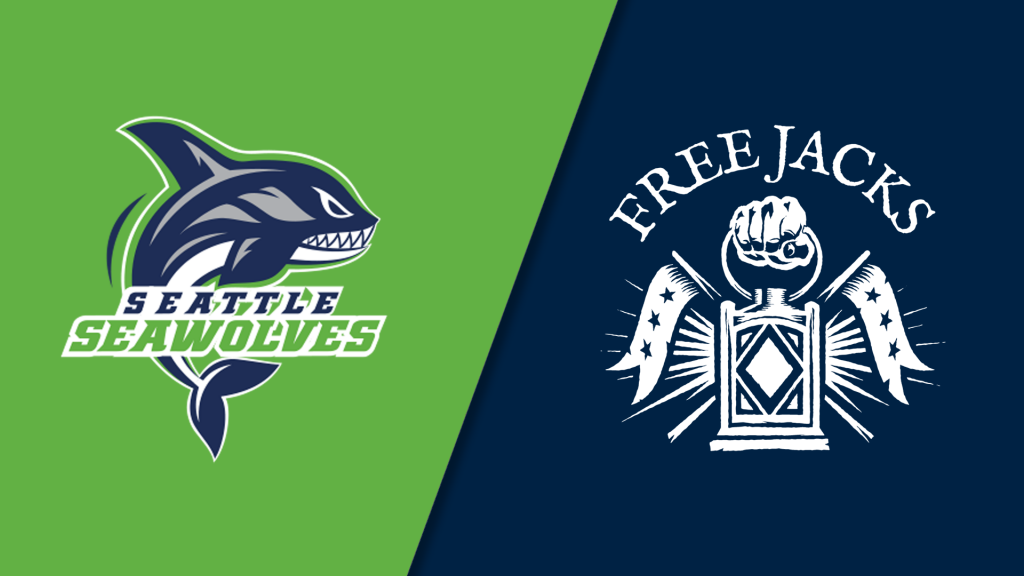 The New England Free Jacks fell short on road this week after a back and forth battle with the reigning MLR champs, the Seattle Seawolves. The final score was Seattle-44, New England-29, with both teams securing at least one bonus point.

The Free Jacks were able to get off to a fast start against the defending champs, demonstrating a good combination of speed and explosiveness across the board. The early pressure imposed by New England would eventually force a Seattle penalty, giving them their first opportunity at executing the set piece in Seawolf territory.

After the throw in from McNulty, the forward pack composed a threatening maul. Scrumhalf John Poland sent a pass out to center, Sam Beard, who found valuable meters into Seattle territory.

A well timed offload in contact to tight head prop Donald Brighouse, sent the big man under the posts for the first points of the match. The subsequent kick from Fly-Half Tim Guillim for the conversion was successful, bringing the Free Jacks out to an early 7-0 lead.

The Free Jacks 2nd try followed from a series of offloads through Mitch Wilson and Sam Beard, to find Poasa Waqanibau. Waqanibau darted through the Seattle defense and offloaded to Danny Collins taking it the rest of the way for the try.

Guillimin’s conversion kick would once again find its mark, putting the Free Jacks up 14-0.

Seattle responded quickly. Following a scrum in New England territory, recently unretired Peter Tiberio secured the first try for his team in his first match back in action. Ben Cima’s conversion brought the score to 14-7.

The Free Jacks 3rd try in the first half come from the back of a lineout in Seattle territory. John Poland began the attacking phases five meters out from the try line. A series of forward carries gave Team Captain Josh Larsen the opportunity to dive towards the try line and come up with the try and extend the lead. 19-7.

With halftime approaching, the Seawolf defense began to up the pace of their attack, helped along by a host of ill-timed penalties by New England. Unfortunately for the Free Jacks, the chances given to Seattle coupled with several lapses in defensive coverage allowed the defending champs to put up two unanswered tries by way of JP Smith and Nakai Penny, bringing the halftime score to 21-19 in favor of Seattle.

Seattle’s momentum would continue from the second half’s outset. Following a New England penalty for not releasing, The Seawolves took their chance at a lineout inside New England’s half of the pitch. From there, scrumhalf JP Smith would find his second try of the game after finding space quickly from the breakdown, pushing his team’s lead to 28-19.

As New England fought to slow the progress of the Seawolf attack, the team found itself a man down at the 45th minute, after Poasa Waqanibau landed himself in the Sin Bid for a spot of dangerous play. A scrum to Seattle following the infringement led to another penalty from the Free Jacks, allowing Seattle’s Ben Cima slot 3 points through the uprights. 31-19 Seattle.

Free Jacks John Poland responded with some elaborate play resulting in the 4th try for the Free Jacks. John spotted some space in behind the defensive line. A chip and chase led to him catching his own chip kick on the way to a try. 31-24.

The Free Jack’s final try of the match was touched down by replacement hooker Steven Hinshaw. From the back of a maul, Hinshaw spun into the in-goal for five points, bringing New England closer at 34-29.

With the comeback now within reach, New England made every attempt to keep their attack going and to keep the pressure on Seattle. Unfortunately, a number of penalties and and strong play from the Seattle side forced the New England defense to allow a further and final ten points to the Seawolves after a penalty conversion by Cima and a second and final try by Nakai Penny. The contest would come to an end with a final score of 44-29.