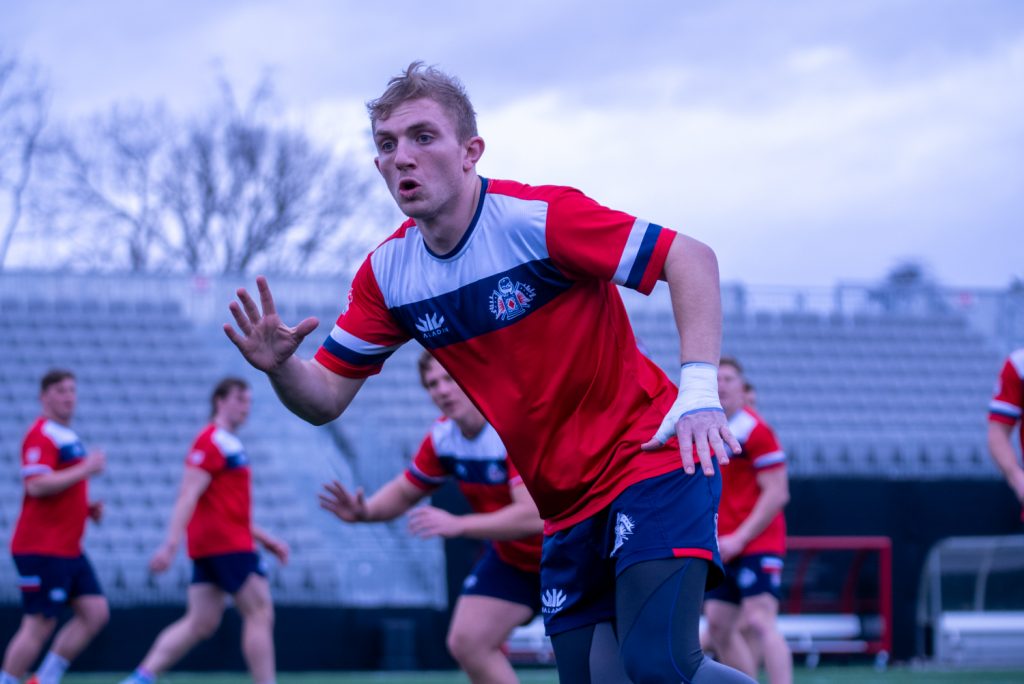 “Everyone in the sun was burning up,” Mitch Wilson laughed. “We were all so pasty compared to LA. Around 60 minutes in, everyone was cramping, it was a tough one.”

Following a trip to the west coast in order to play the LA Giltinis, Mitch Wilson is very much back at home in Massachusetts. Now preparing for a road game in Hoboken, New Jersey, against Rugby New York, the third year Free Jack spoke about how the team is shaping up, his journey to the Free Jacks and looking to the future.

THE SEASON SO FAR

At the weekend, the Free Jacks left California with a losing bonus point. It was a close contest at the home of the reigning champions, the encounter finishing 19-15 in favor of the LA Giltinis.

Following that result, and the conclusion of the most recent round in Major League Rugby, the Free Jacks currently sit third in the Eastern Conference, with Rugby ATL one point ahead of them and this weekend’s opponents, Rugby New York, are four points ahead.

On paper, this most recent trip to play LA was more competitive than the last. Losing 42-27 to open up the 2021 season, Wilson believes that the performance was a promising one, especially under the guidance of new Head Coach, Scott Mathie.

“Last year, we played LA in the first game of the year, and we hadn’t played any preseason games, and they were such a class team, early on especially, and they finished 2021 strongly also,” Wilson said.

“They shocked us last year, but I think this year there was quite a bit of energy going into the game; being able to get a true crack at these guys after having a few games under our belt and being a few games into the season.

“It is unfortunate that we didn’t get the win out there, but we put up a good fight and we will take away a bonus point loss of the back of a cross country trip to LA, the defending champions from last year.

“Morale is still high. As a team, we need to get better and we have got a strong New York team this week, our details, especially on attack weren’t accurate enough, and I think that is what cost us the game.”

Wilson’s rugby education began in his native Australia, the 25-year-old having been born just outside of Sydney. But whilst he is able to call himself a professional rugby union player, he grew up as playing the 13-man code, rugby league, with Emu Plain Rugby League Club.

Moving to Florida along with his family, this September will mark 10 years since making the move from Western Sydney, his journey to professional rugby coming thanks to being a standout performer with Orlando Rugby, where he earned High School All-American honors.

“I’ll credit my mother actually,” Wilson said. “When I first found out we were moving to the US, I was playing rugby league at a decent level, really enjoying it and when we moved over it was pretty tough

“I remember saying ‘I don’t want to move to America, they don’t have rugby there’, so I thought I was giving up rugby and I wouldn’t be able to play again. When we moved to Orlando, my mum had researched every team in the area and was emailing the coaches.

“I was a bit stubborn when I first came and said I wouldn’t go, but I couldn’t start school right away, so I wanted to make some friends and decided to jump into a local Orlando U19s team and created some friends right away and although union was a bit different to league, I had played union before in high school, my old man had too, and I just fell back in love with the sport again.”

Winning the D1A National Championship in 2016, as well as 2018 and 2019, Wilson also captained the side. Even representing the USA at the 2016 World Rugby U20, as well as achieving Collegiate All-American honors for four consecutive years and representing the USA Selects for two years, Wilson was hotly sought after for his services, a major selling point for Wilson being the opportunity to coach alongside his playing commitments.

“It was a tough decision to move up to New England,” he said. “I could have stayed in Atlanta where I was comfortable, where I had friends and a place to live, but I think being someone from a smaller town in on the outskirts of Sydney, I was excited to push myself out of my comfort zone.

“Moving to Florida was way out of my comfort zone and I grew a lot from that, and I wanted to grow a lot more. There was the opportunity to come up to New England, to play for the Free Jacks, but also to be able to get involved with some coaching as well up at Dartmouth College that really excited me.”

Spending half the year in Boston and the half of the year in New Hampshire, Wilson has been largely living out of boxes, finding packing peanuts amongst his possessions on an almost everyday basis.

Playing in the Ivy Rugby Championship, Dartmouth have dominated the competition by winning 10 off the 11 seasons played. Whilst living in Georgia, Wilson did spend time with Atlanta Youth Rugby as an assistant coach, his role in collegiate rugby a refreshing new challenge.

“Being able to play rugby during the MLR season, and then have a job still in rugby and every day I am still going to have a ball in my hand and the type of student athletes at Dartmouth really push me to know what I am talking about and get my point across in a clear way,” Wilson said.

“I had done a bit of coaching at youth level whilst in Atlanta, but when seven-year-old kids are doing helicopters, getting into arguments it is not as exciting as getting to coach with a college program.

“I have really enjoyed being able to do that during the offseason, and it is credit to Mags [Alex Magleby], James Willocks and now Kyle Sumsion is now going to be the new Head Coach, and all the students are great to work with and they get excited to see me playing in MLR and I am just as excited to be able to help them understand rugby a bit more.”

This weekend will see the first of three games in the 2022 season that the Free Jacks will play with Rugby New York. Describing it as the team’s very own “State of Origin”, Wilson is under no illusions of the importance this game will have on the rest of the season.

With clear ambitions of reaching the playoffs, the loss to LA last weekend has not dented confidence within the group in the slightest. Already training hard for the new week’s challenge, Wilson says that he and his teammates are taking it game by game and were encouraged further by their most recent outing.

“Everyone has got a real sense that we can go on and achieve big things this season,” Wilson said. “Right now, it is so early on in the season, and it is a long season, that we are just taking it one week at a time.

“It was a tough loss against the Giltinis on the weekend, but we weren’t going to go undefeated this season. It was a solid battle out there against the defending champions, so if that was one of the losses we have this season, we will take it.

“Guys are really excited to play New York this week. They are sitting top of the Eastern Conference, we are absolutely aware of the standings, but it is so early on in the season that you don’t want to invest too much into that and take one week at a time.”

Having started games against LA and Old Glory DC, as well as coming off the bench against NOLA Gold in the season opener, Wilson has been a major part of the Free Jacks season to date. With the opportunity to get consistent game time motivation enough for the 25-year-old, who is looking to continue his development on the field.

“In each game I want to just make the most of my opportunities, but I don’t want to overthink it or overplay anything and just have fun. Last season, with it being the first true MLR season [for New England] after 2020, that was the takeaway that I had; to enjoy it and make the most of it.

“I don’t think it is every day that you get to play professional rugby or play at the Coliseum or being in California after being in a freezing Boston or going to New York to play our rivals. Really just enjoying the environment, enjoying training, the games and everything that goes with it.”