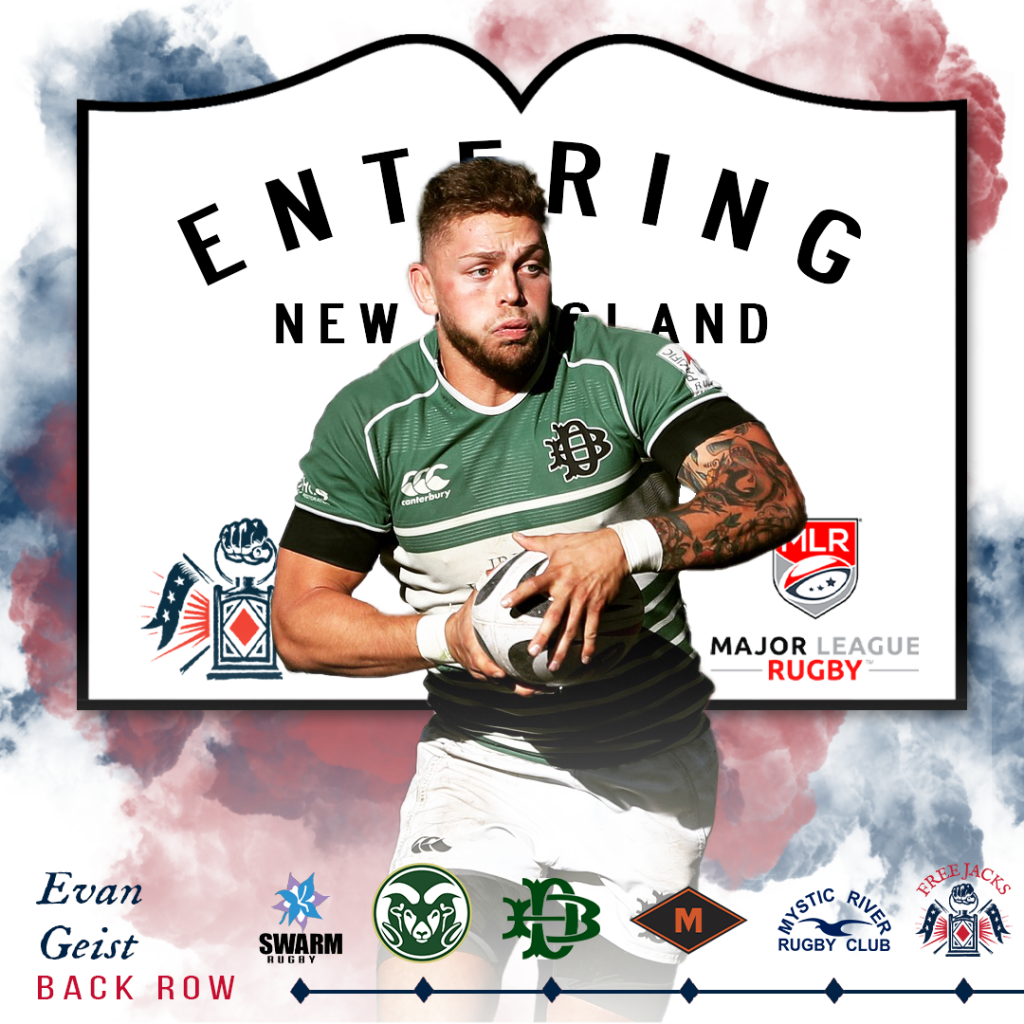 Meet Evan Geist, an imposing back row who adds versatility to the pack with his combined speed, physicality and work rate. It would be hard to find someone who made as many tackles, gained as many meters and left more out on the field than Evan in this year’s ARP competition where he played for Mystic River.

This 26-year-old back row is 6’2” and 235lbs and grew up in the Mountainous-West in Denver, Colorado. Before finding rugby his senior year of High School with the SWARM Rugby Club, Evan played baseball, football and basketball.

“Finding rugby was like finding a sport that fit me as an athlete,” Said Evan. “It’s a sport where I found the harder I worked the more impact I was able to have and that made me want to keep pursuing it.”

After graduating high school, Evan began as a student at Colorado State University, where he was able to attain a Bachelors Degree in Health and Exercise Science while further developing his rugby skills. While at CSU, before making the switch to back row, Evan participated in the USA Under-20 All-American Squad in 2012 as a winger, before becoming a forward and making the All-West Conference team in 2013-2015 as a flanker.

“Playing at CSU helped me grow as a player.” He recalls. “Every day, the guys out on the pitch with you held you accountable and pushed you to get better. I’ve tried to keep up with that ever since.”

After graduating in 2015, Evan played for the Denver Barbarians. He was a standout player in the D2 national conference. While at the Barbos, the team picked up 3 Western conference championships and Evan helped lead the team to a National Championship in 2018. He then went on to earn caps as a 8-man with Meraloma RFC in the BC Premiership.

Evan joined the Free Jacks for the team’s exhibition season in 2019. He credits his strong work ethic for carrying him to the professional level and recognizes the opportunity ahead.

“I’m thankful for the opportunity and stoked to have a chance to be professional but all I want is to show what you can do when you put your mind to it,” Evan commented. “If I’m a guy that is inspiring to the American player that might not have thought rugby was his future but somehow found his way to the game and was committed to working hard, then I can be proud of what I’ve achieved and build on that this coming year.”

When he’s not improving his rugby, Evan can often be found, fishing and camping in the mountains back home or the woods of New England. Recently he has even began work on his own fishing boat!

He spent the Spring and Summer volunteering at the New England aquarium in the turtle rescue department. Evan also used to be the lead singer in a metal band @afloodforetold, a vocal skill sure to carry onto the rugby field where he can motivate his teammates with bone chilling screams of encouragement.

As the MLR season approaches and the Free Jacks begin to make their own transition, Evan is looking forward to joining the rest of the team at the start of pre-season and putting individual efforts together to build a team for the first time.

To catch Evan in action next year with the rest of the Free Jacks be sure to select your seats for the 2020 season in Major League Rugby while seats are still available! Head to foundingmember.freejacks.com or click the tickets link above to get your seats today.