Tournament Wrap Up: A First-of-its-Kind Brawl 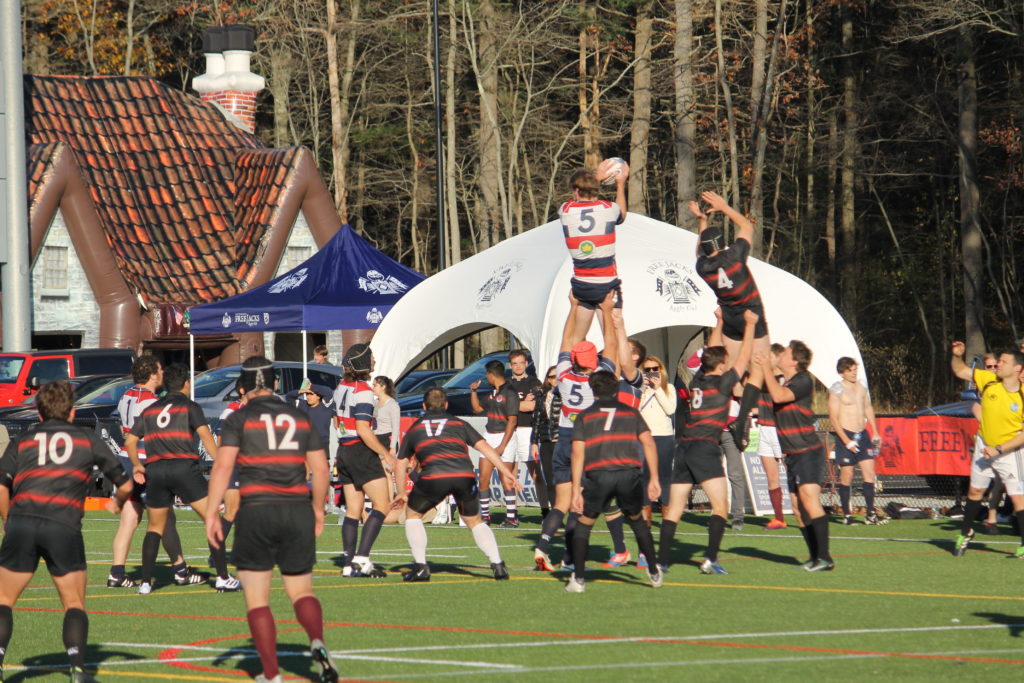 “It was competitive, but none the less just a great time had by all.”

On November 1st and 2nd the Free Jacks, New England’s first professional rugby team, hosted the Boston Brawl, a rugby championship of competing graduate school programs. The tournament kicked off on Friday afternoon at Union Point Sports Complex in Weymouth, Massachusetts, and was the first team event hosted by the Free Jacks since the venue was announced as the official home of the Boston based Major League Rugby franchise for their inaugural 2020 season.

Seven men’s and women’s teams from five different Graduate School programs made their way to Boston for the first edition of the Boston Brawl Tournament. Rugby clubs from the Wharton School of Business, Tuck Business School, Yale Graduate Programs, Booth School of Business, and Harvard Business School all braved the winds of New England for a chance to compete in the Fall Championship Tournament for the chance of being crowned its inaugural champions.

When all was said and done and the final whistle had blown, the tournament was considered by all to be a success both on and off the pitch, which was an aspect remarked upon by Head Coach of Harvard Business School RFC, Peter Sickle.

“First of all, just getting guys game exposure is important, because you’re never going to get better at rugby unless you have live competition.” Said Sickle. “I also think that meeting players from other MBA programs is something that just doesn’t happen enough.”

The latter part was certainly rectified, at least in part, at UP this past weekend, as players from every club could be seen mingling and socializing on the sidelines between matches. And, despite a tough loss in the final to Wharton (21-19), the Coach Sickle was none the less proud of the way his squad played.

“We had guys with different experience levels. And I was definitely really proud that, even though Wharton out muscled us, the guys played for each other and with each other, and with heart.”

That kind of a takeaway is exactly the sort of sentiment tournaments such as these are meant to inspire, and we are looking forward to growing the game at all levels and making rugby as accessible as it can be for anyone to play.

Read on for a recap of the weekend’s events:

The first day of competition featured three high intensity matches with plenty of big hits to rouse the crowd into choruses of “oohs” and “ahhs”. That, along with a steady slight wind on the day which would provide kickers an extra adversary.

The first match of the weekend featured Wharton vs Tuck, in a match that saw some of the highest levels of physicality in the tournament. Despite a valiant defensive effort from Tuck, Wharton was able to gain almost total control offensively in the second half on the way to the first victory of the tournament.

The second match saw Tuck Men take on the Crimson of Harvard for the Green and White’s second consecutive contest of the day. While Tuck’s offense certainly showed more fluidity than it did against Wharton, the toll taken on the team’s endurance was evident in the second half as HBS was able to get the victory.

The third and final match of the tournament would turn out to be a preview of the Championship final, as Wharton took on Harvard. Wharton cruised  to a lopsided victory over The Crimson but the two were set for a re-match on Saturday finishing at the top of the table after a fun and exciting day of rugby.

Day two began with the introduction of the Women’s Touch Rugby division, with HBS, Yale, and Tuck all sending squads to compete, with many of the players even competing in their first ever rugby game. The Women’s Division play began with Yale vs Tuck, with Tuck ultimately getting the W. A second match between Harvard and Yale saw the Crimson emerge victorious against a depleted Yale team. Harvard went on to top the Women’s Division with an end of the day victory over Tuck.

Day two for the Men’s, began with the introduction of the competition’s late entry, The Booth School of Business, who opened their competition play against the then-winless Tuck. However, the Green and White clad competitors made sure they’d be leaving the Bay State with at least one victory, not allowing a single try from the Booth Boys of Chicago.

The second men’s match of the day would be the Tournament Championship between Harvard and Wharton. After a dominating performance the day before, Wharton was ready for a match to swing in their favor, but an energetic Harvard team looked to make it a competitive challenge.

Harvard secured the first try of the game, capitalizing on a Wharton penalty near mid-field with a productive series of phases. The Hogs answered with a try of their own, sending one of their backs flying through the defense after an impressive tight-window offload.

The two teams would each trade one more try apiece, seeing the game reach a near defensive stalemate as the minutes began to wane. With about ten minutes to go in the second half, Wharton touched down their third and final try of the match, pushing their lead to 21-14.

Harvard mounted a comeback, managing a third try of their own before game’s end, but with an unsuccessful conversion attempt following they remained behind. A final series of phases might’ve seen Crimson clinch the game on a last second try, but it just wasn’t meant to be as the Wharton defense corralled them into touch to end the game.

The New England Free Jacks would like to extend their congratulations to the Wharton School of Business for their victory, as well as to all those who competed in the very first edition of the Boston Brawl Tournament!

Thank you to our sponsors: