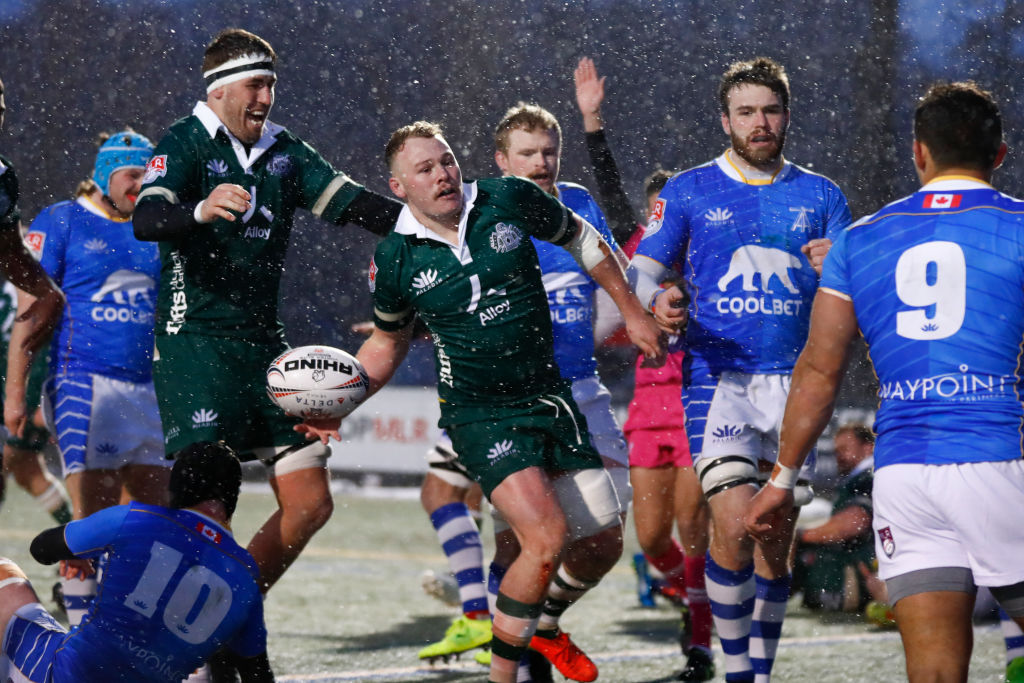 Heading into last weekend’s clash with Rugby ATL, the New England Free Jacks’ visit to Georgia was described as one of the biggest games of the 2022 season so far.

By the conclusion of the clash at Silverbacks Park, the Free Jacks had racked up 41 points to Atlanta’s 27, with tries from Le Roux Malan, Mitch Wilson, Harry Barlow, Wayne van der Bank and Mills Sanerevi all crash over the try line.

For Saturday’s game, your Free Jacks wore black tape around their arms, the thought of their teammate, Terrell Peita, firmly in their minds, the back-row having had to return to New Zealand midweek following a family tragedy.

“That was a big part of the week,” Slade McDowall said. “It was emotional times and we went out there and we played for him. We got around each other and put in a good performance.”

As a result of the win, New England sit at the head of the Eastern Conference, an encounter with division rivals NOLA Gold at Veterans Memorial Stadium coming up on Saturday afternoon.

Currently with a 6-1 record, McDowall says that he and his teammates are pleased with how their 2022 Major League Rugby season is going thus far, particularly after their trip to Atlanta.

“It was awesome to come away with a win,” McDowall said. “Going away to Atlanta, we knew we had to front up and I thought the boys did that and we come away pretty happy with that win.

“A top of the table clash was always going to be good to get up for and we had an interesting week. I think that we have got a lot more to show, but it was an awesome week.”

McDowall has started in all but one of the Free Jacks’ games this season, the openside flanker amongst the top tacklers with the team, the New Zealander having grown with each and every performance.

Born and raised on the South Island, McDowall attended Otago Boys’ High School in Dunedin, a school with a long and storied history of producing world class rugby talent.

It is the school that All Blacks’ Richie McCaw and Wyatt Crockett attended, McDowall following slowly in the footsteps of McCaw in particular.

Each attended the Otago Rugby Academy, play the same position and played for the New Zealand Schools team, McDowall’s foray into that team coming just months before McCaw called time on his career.

Even making the wider New Zealand U20 squad alongside future teammate, Joe Johnston, in 2018, the 24-year-old became a regular for Otago and was part of the wider squad for Super Rugby side, the Highlanders.

“I played about five seasons for Otago, and I just thought I needed a bit of a freshen up, a change of scenery and I just needed to be playing rugby,” McDowall said.

“I think, for myself, when I am playing 80 minutes each week, I find that I am getting better and better.

“Coming over here was about getting some game time in a new environment, challenging myself and putting myself outside of my comfort zone.

“It has been awesome over here, the culture in this team is something else, and we all get along really well, so something is building here.”

It was in 2021 that the prospect of getting a flight to Boston first came up. McDowall’s Otago coach, Ryan Martin, was about to take up the head coaching post with New England, but the openside instead opted to stay in New Zealand and complete his bachelor’s in applied science at Otago Polytechnic.

Taking part in the 2021 Bunnings NPC Championship, Otago made the final, where they lost 32-19. Coming off the bench in that game, McDowall packed his bags in the weeks that followed and made his was to Boston.

“I didn’t really know what to expect to be honest,” McDowall said, when asked about his time with the Free Jacks so far.

“When I got over here, it was covered in snow and bloody cold. It was a bit of shock to the system.

“America is a massive sporting arena, and it is bloody awesome to get into some new sports that I haven’t been watching.

“I went to a Bruins game the other night, and I have enjoyed getting into new sports, I have really loved it.

“It was an awesome time at that game, it was my first ice hockey game, the crowd were nuts and it is a brutal sport.”

It’s fair to say that the NHL definitely rivals rugby for being a savage sport. Yes, in rugby there are no pads, but there isn’t the possibility of being slammed face first into some plexiglass.

Going to TD Garden with several of his teammates, McDowall has already made some firm friends amongst the group.

Living in an apartment with seven of his teammates, that revelation alone is enough to prompt the question of who is the untidiest of the eight.

“On our floor, we are pretty good,” McDowall laughed. “John Poland, he is pretty god around the house with his dishes, but if we go upstairs to the flat above, we have got Dougie Fife, Jack Reeves, Harrison Boyle and Jesse Parete.

“But who would be the untidiest? I don’t know. Maybe Jack Reeves, I think.”

Following the win in Atlanta, preparations to take on NOLA in Quincy have already begun. Of course, it was a trip to Louisiana that kick-started the 2022 season, the first game of Scott Mathie’s rein in New England ending with a 24-13 win.

It was a performance that was far from complete, the performance certainly with its faults, the biggest positive being that the team managed to secure a win despite a disjointed display.

Even coming out of such a positive win in Atlanta, McDowall says that the Free Jacks are looking forward to getting back in front of a home crowd, although the weather will possibly be a bit different.

“The first game at home was in the snow and I think we had 2500 people there and the atmosphere was awesome, especially with the snow,” McDowall said.

“I can’t wait to get back out there this weekend and play in front of the home fans. It is going to be an awesome occasion and I can’t wait.”

This Saturday’s clash with New Orleans and the following weeks game with the Seattle Seawolves will be the final two games before the Free Jacks’ players experience their second bye week of 2022.

Also the first time that New England will play back to back home games this season, the importance of this next fortnight not lost on McDowall or the men he lines up alongside.

“NOLA are a great time, and we have got all the respect for them,” he said. “For us, it is all about taking our learnings from last week – and we have got a few of them – putting them into training this week and getting out.

“We have got two games left until the bye, so we are really treating these two weeks as a crucial part of the season and we are going to take the learnings from last week and implement them this week and hopefully put out a good 80-minute performance.

“For me, this two weeks is crucial. We have had six games on the road and one at home, so these two games at home are crucial.

“We get a week off, so we are going to rest up that week and then come back refreshed, ready to go for the last part of the season, which is going to be a good finish and we are really excited.”